What people should expect from my government - Fayemi 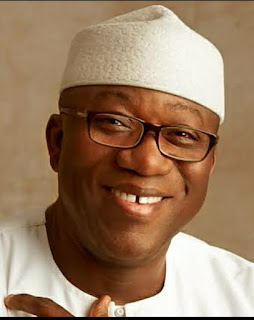 On Tuesday, October 16, Dr. Kayode Fayemi would be sworn in as the governor of Ekiti State for the second term. The expectations are high, but these are not strange to the new governor, who had governed the state before. In this exclusive interview with MUYIWA ADEYEMI, the former minister of Solid Mineral Development gave insight into his priorities in office and what Ekiti people should expect.

How does it feel coming back a second time?

I am thankful to God for giving me this rare opportunity. I feel a sense of elation, a sense of duty. What happened in Ekiti with my return is a testament to resilience, determination and tenacity of purpose.

But I also feel Ekiti has missed out on opportunities, so I feel a huge sense of responsibility as I go back to office to make a difference and ensure the sustenance of such.

Is there anything you would do differently?

I always get asked this question, and I don’t know why. There is no objective observer of Ekiti who ever said we didn’t do well in office.

On the contrary, every serious-minded assessor concluded we did very well in pushing our agenda of making poverty history in the state. There was no community that we didn’t impact in a tangible manner in the course of our time in office.

Equally, independent statistics from National Bureau of Statistics (NBS) and United Nations Development Programme (UNDP) have confirmed that when we left Ekiti in 2014, the state had the lowest maternal and child mortality, lowest HIV prevalence, the highest school enrollment and the highest life span in the country.

One area that I admit we must work on is style, rather than substance of governance.

We are in an age where the work you do in the service of the people doesn’t often speak for you; you have to shout on the rooftop to ensure that people know what you are doing.

This, I find somewhat problematic, but I guess we must find the right balance between quiet efficiency and cheap populism.

The important point is that we must not leave our people guessing.

We must engage our people and ensure we do development with them and not to them and also ensure we communicate at every opportunity.

That is one of the key lessons of our past stewardship.

What is your agenda for the state this time around?

We used to have what was popularly known as the eight-Point Agenda, which we pursued religiously.

We will still address all the issues captured in that agenda, but we will concentrate a lot more on four drivers in this four-year term.

We will focus on agriculture and rural development; expansion of social investments; promotion of the knowledge economy and improve infrastructure and industrial development.

It is our expectation that the State Development Plan, which was developed in 2011, can be reactivated and reenergised, having been abandoned by the outgoing administration.

What would be the thrust/main focus of your administration?

The main focus for us remains making poverty history in our state, as well as restoring the values of honour, decency, decorum and dignity amongst Ekiti people and in the context of regional integration.

Are there policies and programmes of the Ayo Fayose’s government you would take a second look at?

I am honestly not aware of the Fayose government policies, but we will review his time in office objectively and if there are things that meet with best practice, we shall not hesitate to continue such programmes in the overall interest of our people.

Why did you not continue as a minister, serving the whole nation, what is the attraction of being a governor?

The experience garnered from my stewardship at the federal level is bound to assist me in my duty as a state governor, just as my earlier service as governor assisted me greatly when I became a minister.

How do you intend to boost the state’s Internally-Generated Revenue (IGR) to avoid depending on the federal allocations?

We did a lot in improving internally-generated revenue (IGR) in my last term in office by deploying technology, as well as focusing on the informal sector where a lot of tax avoidance is prevalent.

There was also a significant boost in mining contribution to the GDP during my period as minister. I have a track record for expanding the tax net without overburdening the ordinary citizens.

We shall be exploring a whole range of options that can help boost our IGR, whilst improving the ease of doing business in the state, including the elimination of multiple taxations.

In the last four years, many key investors, such as Coca Cola, GTB and Ecobank left the state because of unfriendly investment policies and practices. But we will embark on a massive investment drive.

Many foreign development partners had left Ekiti State, how soon would you get them back?

I have been in touch with many of the development partners who left outright or scaled down operations and they are willing to return to Ekiti.

We are discussing modalities with them and also ensuring that our priorities and their strategic plans are aligned.

A key point that we must address is the sustainability of these assisted programmes, regardless of who is at the helm of affairs.

How do you intend to clear the backlog of salaries and emoluments owed workers by the outgoing government?

During the campaigns, I gave a pledge that we will try and clear the backlog as soon as possible, preferably between six months and a year.

We do not know enough about the finances of the state yet and it would be irresponsible to count chickens before they are hatched.

Once we get in, we will undertake a forensic review of the state, including a staff audit and that will give us a more accurate picture of the finances and where to get money to offset outstanding liabilities.

I believe our genuine, long-suffering workers and pensioners will cooperate with us in addressing this issue.

Will you probe the alleged financial malfeasance of the outgoing government?

I have said that Ekiti people are entitled to know what transpired in government in the last four years.

I don’t call that a probe, even though I understand the journalistic sentiment for the sensational and the outlandish by focusing on semantics and not substance.

Again, I repeat, we will review the state of the state.

How soon would your cabinet come on board?