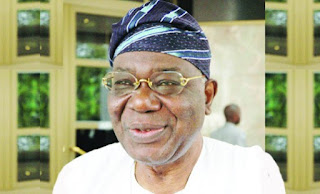 Secretary to the Ogun state government, Taiwo Adeoluwa, has described as a “lie from the pit of hell”, the reports that Ernest Shonekan, former head of interim national government, is dead.

He debunked the rumour today, Tuesday in the evening. According to him, Ibikunle Amosun, governor of the state, had spoken with Shonekan who reportedly told the governor that he was hale and hearty.

Tributes have been pouring in for Shonekan on social media based on the reports.