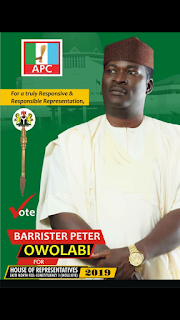 Moving the motion in Ikole Ekiti on Saturday 29th September 2018 at a meeting presided over by the local government Chairman, Chief Matthew Dada Oni, the Chairman of Ward 12, Mr Oseni Akeem Olasunkanmi described Mr Owolabi as a sellable aspirant and a loyal party man who has been working for the party more than eight years without ever being elected into any office.

The motion was seconded by the Chairman of Ward 2 in Ikole Local Government, Mr Ogunyemi Oyeniyi. He described Owolabi as a vibrant youth who had never been disloyal or decamped from the party. The Council party boss then asked the entire congregation if they were all in support and the response was in affirmative.

Speaking on the adoption, the party Chairman said: "we, the entire leaders of Ikole local government decided to take the decision of adopting Barr Peter Owolabi as our House of Representatives sole candidate in this federal constituency because one, we in Ikole local government have noe decided to take our destiny into our hands so that we will no longer lag behind in the scheme of things. Two, Mr Owolabi has paid his dues in the party not only in Ikole Local government but also in the entire State."

Chief Matthew Oni however commended the remaining contestants for the position and declared them fit and capable "but for the sake of presenting a common front, they should please rally round Mr Peter Owolabi so that the position will not elude us again in Ikole Local govt."

In another separate interview with the Fountain Newsbreaker, Barr Owolabi said: "though I was not there when the leaders took their position to present me as their sole candidate in Ikole local government, I consider this as an honour and I promise never to let them down."
News