How did you feel when you emerged as the party Deputy Governor after the general elections?
I was excited, I knew that JKF will win the election because of the work we did.  We really  worked hard for the success.  We traversed  the entire Ekiti and its environments.  We made sure we  covered  every nook and cranny of Ado all the villages were visited, I never took anyone for granted because I knew we needed votes of Ado seriously.  This is where Fayose  had been winning.  During the time of Adebayo we knew the thousands  of votes he garnered in Ado-Ekiti  even during the second bid of Dr.  Kayode Fayemi  we knew the number of votes he had over us.  I wanted to reduce everything.

YOU WERE ONCE A COMMISSIONER FOR EDUCATION, HOW DO YOU RATE THE TEACHERS?
Well in terms of their worth  not all of them are bad some are very good academically. When I was commissioner, I won't announce my visit to schools. I would just sneak into schools at the back of windows  and watch them teach and thereafter call them to advise them.  There are some of them who are food sellers but only did this Kaduna National Teachers course (NTI) at home. You should see them speak in classroom you will be sorry. Some of our grandchildren  do correct their teachers' English.  What I recommended during my time as Commissioner was to have Neighborhood Inspectors who were School former Principals and senior teachers. They went through the normal process of teachers training of those days.  We employed them as inspectors, they would go to schools from their homes and supervise teachers during  office hours watch them teach and correct  them.  They prevented them from selling  goods during school hours.  It was as a result of what we did that paved way for the better result of school children within one year. 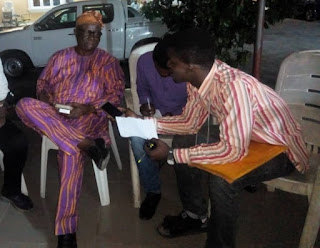 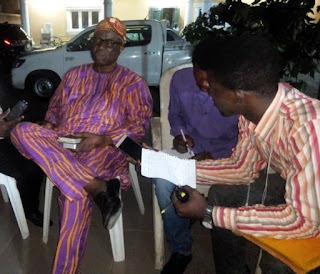 WHAT ABOUT THE INSPECTORS YOU INTRODUCED?
This man (Fayose) discarded them by sending them packing on assumption of office after .Otunba Niyi Adebayo

COULD IT BE THIS POOR PERFORMANCE THAT  LED TO THE CONTROVERSIAL TEACHERS TEST UNDER JKF'S FIRST TERM?
Fayemi never gave them  a test they were to be assessed. Some didn't know the name of the governor  of a neighbouring state not to talk of long distance states.

YOU WERE ALSO IN THE MINISTRY OF JUSTICE, WHAT DID YOU PUT IN PLACE THERE?
In the ministry of justice I started the Civil Procedure rule because I saw it in Lagos which one Mr. Apata came to do for us and he did a marvelous job.  It was during this time that we had the new 2011 Civil Procedure Rule in Ekiti.  He was on Leave of Absence. He was the Permanent Secretary in Ekiti State Ministry of justice during Fayemi’s tenure.

WHAT SHOULD  THEY EXPECT DIFFERENTLY NOW?
The teachers and the local government workers should expect payment of their salaries but they  should  be prepared  to work harder. Local Government should generate their internal income. They shouldn't  depend on federal allocation alone.

AS A ONE TIME LOCAL GOVERNMENT CHAIRMAN, WAS YOUR LOCAL GOVERNMENT  SELF SUSTAINING?
Go and check my records in the whole of old Ondo state, I was  given the best chairman both in Ekiti and ondo because we generated  revenue more than any local government between 1991 to 1993.  During  my time as L.G Boss no civil servants would involve  in fraud to avoid being sacked. There was an incident some of them were caught in fraud and I wanted to take them to court but asked them to choose between  court and termination of appointments and that if they won in court they could continue  with their job but if not they face criminal charge. It started when I became the chairman  of the council, I was a former solicitor to some of the Beer Distributors one was Mrs Owolabi along Iworoko road, Ado-Ekiti. Sometimes  when I got there I asked if our boys had come to collect the tax but she answered  yes and even showed the receipts for her payments.  I discovered  that not all the money were being remitted into the council's purse. If somebody paid twenty five thousand Naira as tax these men would remit only five thousand  and pocket the rest. So we discovered  that about Eight or ten of them were involved in the fraud.  We discovered  they stole a lot off money. What I did was to constitute  a committee  which went round all the Beer parlours in town and crosschecked all the receipts that were issued  as tax.  It was then we discovered  that about ten of them were involved  in the racketeering.  They started  begging me but it was  in the news and as a lawyer I couldn't cover them again.  I had reported them to the police, the option was either they go to court or we terminate  their appointments so they opted for termination. So we terminated their appointments.  That was at the risk of my life because they started  threatening me with juju and I told  them I was doing the right thing to save Ado local government at that time.

WILL THE INCOMING GOVERNMENT RE-INTRODUCE THIS KIND OF SANITY IN LOCAL GOVERNMENT?
Well whatever my Oga intends to do is what I will support but I will advice that we should  look after the internally generated revenue.  I have been there I know their secrets and how they use to enrich themselves.

THE PEOPLE STILL WANT TO KNOW IF THE TEACHERS ASSESSMENT WILL STILL BE INTRODUCED
No! According to Govr Fayemi, we didnt even intent to give any test ab initio.  So we are not going after anybody. because it was what they used to blackmail  the previous government of Dr.  Kayode Fayemi but then teachers must do their work.  There are some teachers who don't have lesson notes,  they only copy from old lesson notes and that has prevented them from upgrading from old syllabus.  The test is just a blackmail. some just write lesson notes to please their masters

THERE ARE SOME INSINUATIONS FLYING AROUND THAT YOU MIIGHT NIT BE ABLE TO PERFORM TO EXPECTATIONS CONSIDERING  YOUR AGE
I'm endowed by God.  Am I going there to cut grass or till the ground? Am I not to use my brain? The way am talking  to you do I sound like somebody that is not okay? Or do I look like somebody that cannot perform? That is the work of the satanic people.  They will know if I will perform or not when my boss gives me an assignment  and I carry out the assignment  creditably well.  They need my experience that is why I was brought in and by the grace of God I will let them benefit from my wealth of experience.

AS A GRASSROOT POLITICIAN IS THERE GOING TO BE A DIFFERENCE THIS TIME IN THE APPOINTMENT OF POLITICAL OFFICE HOLDERS?
There was no detachment from the grassroots in JKF's first administration.  When people don't like your face there is nothing they will not say.  We are going to carry everybody along.  I mean grassroots politicians. The governor  has been there for four years before, he has garnered enough experience and we will merge the old and new brains together  to achieve a good result and the people  will no doubt like it.  The results will be fantastic I'm not a praise singer but Dr.  Kayode Fayemi is highly educated and well exposed. So because you want him to act as a grassroots somebody  now you expect him to be eating Booli in the street?  Like myself even though i'm not the governor  I have never gone to any restaurant  to eat unless I travel out of state.  No restaurant  will say I have come to eat or drink Emu (palm wine) all in the name of being a grassroots  man. Who do I want to impress at this stage? I don't do that it's not pride. You can be close to the poor people  by allowing them to come to you, by empowering them not by raking their money, not by deceiving them.  Well I'm yet to be inaugurated I have been receiving lots of invitations for birthday ceremonies and even from churches, these are the same people that will call us thieves on the pulpit but now they are coming  to us for donations.  The type of visitors I'm receiving  now were not coming before the election.  But I will not discourage them but I won't do more than what I can offer.

Your advice to the youths
My advice to the youths is that, they should try to have plans for their lives. If you have plan A, you should be thinking of plan B. Our youths are always after salary jobs, we should migrate from that sector to become entrepreneurs. Like I did something in Ado for a relation of mine, she complained to me that her husband was not taking good care of her, I said, “you are a lazy woman”. I gave her only N25,000, to be going to IgbaraOdo every market day to buy plantain, I told her not to buy banana but plantain. I told her to buy plantain of N20,000 and use five thousand Naira to transport it. My brother, if you buy twenty thousand Naira plantain in Igbaraodoon their market day, if you go there very early in the morning, you will sell it for thirty thousand and make a gain of ten thousand. If you want to concentrate on Igbaraodo alone, the next five days, you go again, then you will be earning ten thousand every five days, if you are not lazy - the woman is doing fine now. Then, our people are too lazy. There is nothing that prevents us from having people selling smoked plantain (Boli) at every junction but they will not want to do that, they will not want fire to burn their hands. If you are not ready to work hard, you cannot make money. When I was a teacher, I was going from one school to the other to construct field because I was a sports specialist. So I was constructing field, sold sporting equipments, football jersey, I will go to Lagos to buy jersey and I left that, I became a lawyer. I registered my company; my company was taking building contracts from local governments and the State government. All those did not affect my legal practice because I have people there; all I needed was to give them money. Today, it is no pride o; I still have about two thousand hips of yams that I have not harvested in my farm. I planted more than two thousand yams and I do not harvest until November-December. Mt advice to the youths is that, they should think about what they have interest in and develop the interest. Buying and selling. Agriculture, piggery etc are quite profitable.
Entertainment News