Labour union leaders in Ekiti State have expressed confidence in the government of Dr Kayode Fayemi to implement the N30,000 new national minimum wage when signed into law by the Federal Government.

The labour leaders stated this at the Governor’s Office, Ado-Ekiti on Tuesday during a peaceful rally organised by the Nigerian Labour Congress (NLC) around Ado-Ekiti, the State capital, to drum support for the new minimum wage.

Labour leaders who spoke on behalf of the workers during the protest recalled that Fayemi was the only governor to review workers’ salaries and emoluments three different times during his first tenure. 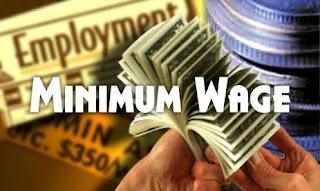 They pointed out that the Fayemi-led Government also paid a little above the minimum wage for its workers.

They said through the Governor’s antecedence, they were convinced that Ekiti State government would effect the N30,000 minimum wage.

The Ekiti State  NLC Chairman, Prince Ade Adesanmi said: “We know Governor Fayemi’s antecedence  when it comes to workers welfare. During his first term, the Governor implemented the 18,000 naira minimum wage, implemented workers relativity as well as the Conhess/Conmess for workers in the state . We are convinced that he will not hesitate to implement the 30,000 naira wage once the process is perfected.”

The labour leader who said the nation would witness a major strike action if the minimum wage was not signed into law, however urged Governor Fayemi to join other colleagues to prevail on the Federal Government to effect the minimum wage.

Governor Fayemi who was represented by his Chief of Staff, Mr Biodun Oyebanji, assured the workers that the state government is not only interested in increasing their wages, but also to promote work friendly environment tat would enhance their productivity.

"This government came on board as a worker friendly one and that relationship shall be sustained. We shall create a conducive working environment for workers and we shall engage in human capital development and capacity building to motivate you'', the governor stated.

He reiterated the determination of his administration to take workers welfare and regular payment of salaries as priority, noting that workers are currently being underpaid and as such, should not be denied of regular and timely payment.

The governor promised to take the workers requests to the Governors Forum holding in Abuja with the aim of resolving the minimum wage issue to forestall the nationwide strike.

Ekiti State Head of Service, Dr Gbenga Faseluka called for the review of the revenue allocation formula to favour the governments at the lower levels in order to accommodate the new minimum wage.

Earlier, the National Vice President of the NLC, Comrade Solomon Adelegan and the State TUC Chairman, Com Adesoye both emphasized the need to implement the 30,000 naira being agitated to forestall the nationwide strike billed to commence on November 6.
Job Opportunity News