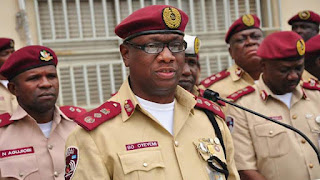 The Federal Road Safety Corps (FRSC) says the third stage of its ongoing recruitment will commence soon.
Public Education Officer of the corps, Mr Bisi Kazeem, made this known in an interview with the News Agency of Nigeria (NAN) in Abuja on Friday.
The agency had between Sept. 24 and Sept. 29, commenced the recruitment, with a physical screening of no fewer than 324,000 applicants, who applied for 4,000 jobs in the corps.

The exercise was for various cadres, including officers, Marshal Inspectors, and Road Marshal Assistants.
Kazeem said that the last physical screening that was conducted was the second stage of the exercise.
“Efforts are on for the third stage. We had earlier conducted the second stage which is the screening
“Efforts are on now to call people that have been shortlisted for the officers and marshal inspectorate cadres,” he said.

According to him, those applicants shortlisted during the screening will be made to write an exam which is to be conducted by JAMB.
“The marshal assistants which is the lowest cadre, including artisans, will only be interviewed without going through the JAMB exam.
“After JAMB, the officers will still go through the interview but the marshal assistants are going for an interview which is going to be their last stage.
“They will soon be contacted,” he said. (NAN)