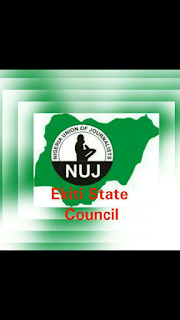 The Nigeria Union of Journalists (NUJ) Ekiti State Council had promised to give all necessary support to the new  Chief Press Secretary to the Governor, Mr Olayinka Oyebode,  towards achieving great feats.


The Nigeria Union of Journalists NUJ Ekiti State Council however,  expressed happiness over the appointment of Mr Oyebode as the Chief Press Secretary to the new governor, Dr Kayode Fayemi.

In a statement in Ado Ekiti,  the chairman of the council Lion Rotimi Ojomoyela and the secretary Kayode Babatuyi described the appointment of Mr Oyebode as a round peg in a round hole describing him as  an astute, deligient, selfless and professional journalist who has made a landmark in the media industry.

The statement rejoiced with the new CPS and prayed God to grant him the wisdom to record unprecedented successes and to justify the confidence reposed in him by the governor.

According to the statement, the appointment of Mr Oyebode is a great plus for the media industry in the state and beyond,  adding that the impact and contributions of the CPS to both individual journalists and media organisations  during the first term of the governor can not be quantified.

It appreciated the governor for the appointment and hoped that more journalists would still be absorbed into the government to enable them contribute their professional skills towards the realization of the noble policies and programmes of the present government .