The Bishop of Ekiti State Catholic Diocese, Bishop Felix Ajakaiye has tasked, Ekiti State Governor, Kayode Fayemi to appoint the right people in the right positions and not to seek vengeance in this second coming of his.

The cleric made this statement today at St Patrick's Catholic Cathedral, Ado-Ekiti, during his sermon at the thanksgiving Mass Service of the New administration of the new governmWent.

Build up to the All Progressive Congress governorship primary election a lot of his aides turned against him by writing against him on social media and went as far as supporting other aspirants. Some of them were not favourably disposed to Fayemi's ambition because they were not carried along. They however worked for him at the general elections which eventually brought him back to power. The cleric therefore warned him against vengeance urging him to go ahead to make use of those who are fit among them.

In his sermon, the Bishop said, "appoint the right set of people in the right places, because your name is at stake. After you leave office, I will question you, so be mindful of your actions."

While also advising the governor he said, "Your second coming is not a vengeance mission, because vengeance is of God and not of man. 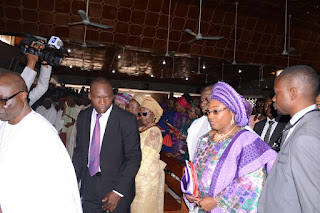 "Make Your second coming a greater one by implementing people's orientated policies. Know that the power of the people is greater than the people in power", he added.

Talking about the tax imposed on pupils of primary and secondary schools by the immediate past government, Ajakaye commended Dr Fayemi's administration for abrogating child taxation which Catholic church had already taken to court.

He also cleared the air about the case of the Catholic charging  the government to court over the tax imposed on their pupils, that the case had been won by the church and they have been the directed to the chief Judge of the state, contrary to what the press circulated about the case still being in the court of appeal. He admonished journalists to be sure of their details before going to press.


The cleric also acknowledged the presence of the Ekiti State speaker,  House of Assembly, Rt. Honorable Adeniran Alagbada and said, "the house of assembly is not the governor's house, I pray that God will give you the wisdom to preside over the house".

In the closing remark the governor said: "our government will be all inclusive, we are not perfect and can make mistakes, so I'm apologizing for whatever we are not going to do right. Our government is here to right the wrongs of the past".

The Thanksgiving service was part of the Inauguration ceremonies which started on the 15th of October with an Inaugural lecture and will come to and end today, Sunday, 21st of October, 2018 with a civic reception at the country home of the governor at Isan Ekiti.
News