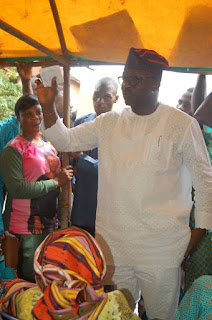 Contrary to the rumour making round that Ijero Local Government is a no-go-area for other aspirants outside the council, it was a celebration galore when the leading House of Representatives aspirant Mr Victor Olumuyiwa Kolade visited the various wards there just as the Owa Ooye of Okemesi Ekiti, Ova Adedeji Gbadebo gave him his blessing in his palace.

It was a jubilation galore when the VOK team visited Ekameta as a mammoth crowd was already waiting for them at Araromi.  The situation was not different at Ekamarun where the people met the team at Iroko.

The Efon Alaaye born lawyer, visited the palace of Oluroye of Iroko Ekiti who was his age long bosom friend. The monarch gave Kolade a nostalgia welcome and wished him a resounding success in Iroko Ekiti and other towns of the entire Local Government. The duo were childhood bosom friends.

It was like a carnival at the four wards of the Ijero Ekiti township as they all converged at the party secretariat to receive the House of Representatives hopeful who analysed that since the inception of the new political dispensation, Ijero had had two slots just like Ekiti West unlike Efon which is just having a slot of the House of Representatives position in the Senatorial district.

On Saturday, VOK Team visited Iloro, Ipoti, Odoowa and Ikoro Ekiti. In each of the wards aforementioned, Mr Kolade seized the opportunity to felicitate with the newly elected ward officials and promised  them good services. According to the VOK Campaign Director General, Mr Gabriel Ogunfolajimi; "it's very obvious that Barrister Victor Kolade is a man to beat in this race  because he has been warmly received in the entire Ijero Local Government where the people assured him of their votes.

At Iloro Ekiti, Mr Kolade who was accompanied although by his wife, met with Chief Kolawole, (aka Olokuta), Engr Billy Fasola, Mr Awolu Joseph, Mr Komolafe Lawrence and Mr Femi Borisade. The leader of the party in Iloro Ekiti, Chief Kolawole who is also the father of the former Commissioner for Finance, Mr Dapo Kolawole, "Kolade is a complete gentleman who is deserving of our votes and we shall give him our votes".

The turnout of people in each of the wards mentioned proved to the cobtrary the rumor that Ijero was a no go for any other aspirant who is not from Ijero Local Government.

In a similar development, leaders and hundreds of party members trooped out end mass in Okemesi Ekiti to meet VOK Team at the Town Hall Pavilion where the three wards of Okemesi were gathered to receive Mr Kolade for the second time.

It will be recalled that Mr Kolade had earlier done a ward round tour in Okemesi during which there was a fracas. This time around it was an home coming as the aspirant was heartily received by all and sundry.

Among the leaders who welcomed Mr Kolade in Okemesi Ekiti are: the Senatorial Women Leader, Alhaja Tunrayo Adesina and former Special Assistant to the Governor Kayode Fayemi, Akogun Tai Oguntayo. The three ward Chairmen were also present at the event where they described Kolade as gentleman to the core who is familiar with the terrains in Okemesi.

Speaking at the occasion, Kolade promised the youth good job opportunities and assured the aged of empowerment if he wins the House of Representatives position. He lamented the poor governance under Governor Ayodele Fayose and assured the people that Governor Kayode Fayemi would bring smiles to the faces of Ekiti people. He promised to work hand in hand with the Governor Fayemi to bring dividends of democracy to Ekiti

Kolade did not leave Okemesi without visiting the palace of the Owa Ooye, Oba Michael Adedeji Gbadebo who gave him his royal blessing. Kolade once again thanked the monarch for his fatherly intervention in settling what would have become a communal clash between Okemesi and Efon Alaaye during his first visit to the town. The monarch in his response, described the two towns as Siamese twins that could not be separated. Oba Gbadebo then prayed for Kolade just like he did for Dr Fayemi during the last governorship campaign.
News