10 Signs Men Show When They Don’t Love You Anymore 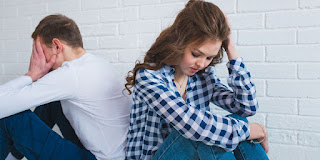 There’s a stark difference between when a man loves you and when he doesn’t. When a man no longer loves a woman, he makes it obvious and certain things change about him. He makes it known through his body language, his behavior and the way he treats his lady. These are some of the signs a man shows when he doesn’t love you anymore.

1. HE STOPS COMMUNICATING
When a man doesn’t love his woman anymore, he no longer sees the need to communicate with her; communication becomes a burden to him. He talks less to her, he doesn’t communicate his feelings or things that are going on in his life anymore and he doesn’t even listen to her anymore. When his communication level drops to this extent, then that’s a sign that he isn’t in love anymore.
2. HE STOPS DOING THINGS FOR YOU
When a man is in love with his woman, he does things to make her happy, he tries to impress her and he does things to make her comfortable and love him the more. However, when a man stops loving a woman, all these things become forgone.
3. HE STOPS HAVING YOUR TIME
When a man no longer loves a lady, he stops having time for her; he would rather spend time with his friends or do other things rather than be with his lady. All those fun times and special moments would fizzle away when a man stops loving a woman.
4. HE BECOMES EASILY IRRITATED
A man who has stopped loving his woman would easily become irritated at any little thing she does. The reason behind this is the lack of love; love is tolerating, so a man in love would easily tolerate his lady. However, a man who no longer loves his lady would lose the tolerant nature he once had towards her.
5. HE BECOMES ANGRY FOR LITTLE OR NO REASON
When his tolerance level for his lady drops, this could make him easily lose his cool at the slightest instance; he would shout at her and get angry at her for even a little thing that shouldn’t really make him angry.
6. HE WOULD TRY TO SHUT HER OUT OF HIS LIFE
A man in love with his woman would let her into his world; his life would be like an open book and he wouldn’t hide stuffs from her. However, the same cannot be said about a man who doesn’t love a woman; he would shut her out of his life gradually till it reaches a point where she wouldn’t understand him anymore and can’t reach out to him.
7. PHYSICAL INTIMACY DROPS
Of course, physical intimacy would only be there when he has feelings and affections for you. But once he stops loving you, the kisses, hugs and cuddling and every other form of intimacy would disappear into thin air.
8. HE DOESN’T TAKE PART IN YOUR WORLD ANYMORE
When a man stops loving you, he wouldn’t want to share in your world anymore. He wouldn’t share in your happiness and wouldn’t share in your sadness anymore. He doesn’t feel excited in your world anymore and wouldn’t want a part of it either.
9. HE STOPS SAYING AND SHOWING HE LOVES YOU
When a man stops loving you, the three magic words “I love you” fades out with his love. Also, he would stop showing you that he loves you; he doesn’t say it and he doesn’t show it — he becomes cold towards you.
10. HE STOPS BEING CARING
Of course, this goes in line with the previous tip. A man who has stopped loving you would no longer care about you; he wouldn’t treat you like a woman, he wouldn’t make you feel special, he wouldn’t spend quality time with you and his romantic side would also fizzle out.
When a man stops loving a woman, he let these ten signs out and he becomes a shadow of the man you once knew.