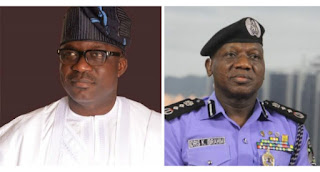 Police orderly attached to the All Progressive Congress House of Representatives aspirant, Mr Victor Olumuyiwa Kolade has been stabbed in Okemesi Ekiti by a yet to be identified aggression suspected to be one of the supporters of a House of Assembly aspirant in the town.

The ugly incident occurred yesterday at Okerena street in Okemesi during the Ward meeting of Okemesi Ward 09 when Mr Olumuyiwa Kolade visited members with campaign train. This is the ward of one of the three house of Assembly aspirants, Mr Johnson Oyekola Bode-Adeoye, who was also at the ward to conclude his ward tour of the constituency.

Mr Olumuyiwa Kolade, an Efon Alaaye born lawyer had already visited APC members in Ward 08, Okemesi Ekiti where the leaders and members in their hundreds received him peacefully without any rancour. Ward 09 is the ward of another House of Assembly aspirant, Akogun Tai Oguntayo, who was also present at the meeting to receive JOBA and VOK who both spoke to the people one after the other.

The two visitors arrived Akogun's ward almost at the same time but the ward Chairman, Mr Taiwo Matins Ibidapo asked Mr Olumuyiwa Kolade to exercise some patience for JOBA to finish his campaign which he (VOK) did, sitting in his vehicle with his wife for more than 30 minutes.

When JOBA left Ward A, he moved to Ward C with his supporters, VOK went to Ward B with his campaign train. While still at Ward B, JOBA came with his supporters, majority of whom stayed outside the meeting place because the venue was not spacious. At this juncture VOK had rounded off his speech so as to move to ward C when some boys that followed JOBA to the ward allegedly accosted VOK and demanded for money.

According to the House of Representative aspirant, "when those boys came and said I couldn't just came to campaign there without their authority, I considered it a joke and told them to allow me get to the car to give them something but before I could know what was happening, they were already having a scuffle with my orderly.  They seized the magazine of his riffle, stabbed him with knife at the buttock and beat him with logs of wood and other dangerous weapons. However, I ensured he did not retaliate but we had to move immediately to the palace of Owa Ooye who waded in and ensured that my orderly's seized items were returned"

While the scuffle lasted outside the meeting place, JOBA was inside, addressing party members. VOK disclosed that he sent to him "to please come outside and appeal to his boys who were wielding dangerous weapons but he (JOBA) said 'things will find their level'.".

However, JOBA's campaign coordinator, Mr Gbenga Oyewole aka Mexico who was outside with the boys was said to have tried his best to prevent the worst scenario.

At the palace, Oba Michael Adedeji Gbadebo frowned at such an attack on another aspirant within the same party. The President of the Federation of Okemesi Improvement Unions, Alhaji Bayo Ajijola who went to visit the Kabiyesi also witnessed VOK's complaint.  Kabiyesi asked the attackers who were also at the palace to explain what happened and one of them said VOK's car pushed him into the gutter but upon further investigation, it was gathered that what actually triggered the attack was that the police riffle mistakingly hit Mr Mexico's iPad which fell down. Mexico was using the iPad to record JOBA's event.

Attempts to speak with the injured police failed as he was said to have been taken to the clinic for treatment but Mr Kolade who spoke with our reporter said, *Kabiyesi has waded into the matter and I do not intend to go beyond that level. Thank God the matter did not escalate beyond that. Most important thing is that the police is responding to treatment though only one of his two phones seized was released to us"

The Chairman of the ward where the incident occurred, Mr Adesola Adedeji spoke with our reporter, lamenting the ugly incident.  He confirmed the story saying "I was inside receiving JOBA, a member of my ward and aspirant for the House of Assembly when I was told that some of his boys were attacking VOK's orderly but there was no way I could leave where I was because even if I did, they couldn't have listened to me since they were not all members of my ward." Mr Adedola pleaded with VOK describing the incident as "very unfortunate.".

The FOIU President, Alhaji Ajijola, condemned the act and pleaded with the party leadership to take necessary actions on the matter. Meanwhile the two other aspirants for the House of Assembly in Okemesi Ekuti, Akogun Tai Oguntayo and Mr Yinka Ajala declined comments on the issue.