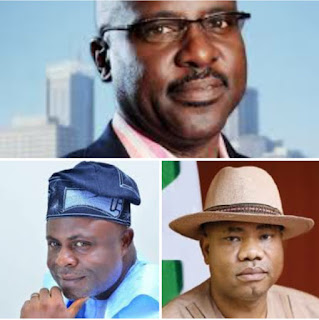 Fate of many aspirants is hanging in the balance as there are allegations and counter allegations of plan tod impose some aspirants at the primary election of the All Progressive Congress in Ekiti State.

The Governor-Elect, Dr Kayode Fayemi, while addressing some politicians at Isan penultimate Monday, had assured them that "I have no anointed candidates". Even at that, there is the understanding that only trusted aides and loyal party men, not moneybags will be allowed into the State House of Assembly this time around to forestall ugly experience of the past.

However, a melodrama has however started occurring over the National Assembly positions as most of those who lost out in the last APC governorship primary elections are now planning to change the game plan. This has made some aspirants for the senatorial and House of Representatives to be jittery while some have decided to forge ahead.

Over 500 Aspirants in Ekiti are jostling for positions in the Forthcoming Assembly elections. The State is  already bombarded with banners of many  contestants aspiring for positions in both Lower and Upper Chamber, aside numerous online advertisement to this effect.

Recently, some of the Aspirants visited the Governor Elect- Dr John Kayode Fayemi in his Country home- Isan Ekiti for his support and to receive his blessings. He   declared he had no anointed candidate urging them to intensify  efforts towards their aspirations in their various constituencies.

He assured the Aspirants of credible Primary elections, and promised the support of the party to whoever emerged. He also declared that he had no power to endorse any candidate before primary election. The Governor however promised rewards of contribution  towards  the sustainability of the Party.

A check into the   political development within the APC in the three senatorial Districts  of the state  revealed that Prince Dayo Adeyeye has been allegedly adopted for the Senatorial seat of Ekiti South while the ailing former member House of Representatives, Hon. Micheal Opeyemi Bamidele (MOB) is said to have secured the nod for Ekiti Central. Former governor of the State, Engr Segun Oni, who has taken the Governor-elect to court to challenge his eligibility, is said to have secured Ekiti North senatorial ticket for his kinsman, Senator Olu Adetunbi.

Speaking with our reporter, a leader of the party from Ekiti North Senstorial disyrict, Evangelist Femi Bobade declared the rumoured arrangement as "anti-democratic as all interested aspirants should be allowed to participate in free and fair primary elections"

There seems to be a new political calculation now that may change the planned adoption arrangement in the three senatorial district as some aspirants are more determined more than ever before to challenge those that were purportedly adopted.

In the central, serving Senator Fatima Raji Rasaki has declared her intention to contest against MOB on the ground that all serving senators have been promised the ticket if they could impeach the senate President, Bukola Saraki.

Also, a former Commissioner for Health in the State, Dr Femi Thomas is said to be jostling for the Ekiti Central seat as his people insisted that it is now the turn of Ijero Local Government. A strong indication emerged at the 50th birthday bash for his wife in Ikoro Ekiti on August 26 when the musician repeatedly chanted "Dr Demi Thomas for Senate" in the presence of the E-11 members present at the occasion. E-11 is a formidable sociocultural group in Ekiti state consisting of Dr Fayemi, Engr Oni and Senator Babafemi Ojudu.

Dr Segun Osinkolu in the North is now said to be leaving no stone unturned on his senatorial ambition as his bill boards are now dotting every local government in the senatorial district. Former governorship aspirant and Deputy Director General of Kayode Fayemi Campaign Organization, Hon Bamidele Faparusi is set to alter the purported adoption of Prince Dayo Adeyeye.

The Political struggle became mire intensified when Dr Fayemi in his speech while addressing the aspirants at Isan, made a statement that ‘’ti Aburo mi Adetumbi ba se primary to wole ko seni to le ni ko mase Senator’’ (if my brother Adetumbi contested for primary election and won,  nobody can stop him from becoming Senator)

Day in day out new entrants from the districts  are still entering the race, notable among the aspirants are  politicians like Cyril  Fasuyi, Hon Segun Ajepe from Ido Osi Local Govt, others are Chief Bayo Aina from Moba Local Government these according to the leaders are vibrant politicians in their jurisdictions.

Hon Faparusi, in Ekiti South had insisted that "thorough screening should be conducted for all the aspirants for the national assembly to know their contributions to the party in the past".  His insistence is not unassociated with the adoption of Prince Adeyeye who decamped to APC shortly before the governorship general election after losing the PDP primary to Professor Olusola Eleka.

Those promoting Dr Femi Thomas in Ekiti Central also opined that apart from the naginaluzation if Ijero Local Government by the other four Local governments, Thomas had really worked for the party since he joined APC three years ago. Though they sympathised with MOB over his stray bullet attack, they said that should not deny other credible aspirants for the position.

When contacted to speak over his rumoured ambition, the Ikoro Ekiti born medical doctor said, "well I'm not unaware if the clamour for my Local Government (Ijero) to also have a slot since the remaining for have tasted it, but I'm still consulting widely.". Thomas said he would make his opinion known on the senatorial seat as soon as he concluded his consultation.

The development in Ekiti North Senatorial District, to  many people,   makes the race interesting and the District open to contenders which in any case  "gives opportunity for credible aspirants to contest".

Many party leaders from  Ekiti Northern District, in their analysis declared Dr Olusegun Oshinkolu as  a better with wider chance  among his Co-contestants considering his level of acceptability  by the people, the reputation they said, he has built  several years back through  masses oriented programmes and activities.

The APC Leaders described Oshinkolu as a persistent politician with patriotic mind who is fit and capable to diligently serve his people. They commended his "doggedness and generosity".

According Evangelist Bobade, ‘’it will be unfair to adopt someone who has gone there once without much impact on the people above someone who has been aspiring for the position for the past ten years, and  despite the inability to record  success he still remains unperturbed and  never defected to another political  party".

Another prominent leader in the district said he declared total support  for Oshinkolu since 2015 when he discovered the level  of his persistence  and selfless attitude even when he lost the National Assembly Primary Election in 2015.

Majority of the leaders who expressed their candid  opinions on the political situation in the District said  Senator Olu  Adetumbi did his best when he  represented the district at the National Assembly  though operated as an opposing force that time –ACN Senator, While PDP was the ruling party . They described Senator Adetunmbi as one of the best senator Ekiti North Senatorial and even the state at large was proud of but  notwithstanding, the leaders emphasised that the general belief of the  people is that "opportunity and consideration  should be given to a fresh blood this time around, a selfless and energetic mind  like Dr Olusegun Oshinkolu".

They discredited  some comments going on in some circles that the  fact that Governor elect comes from Isan Ekiti and Oshinkolu from Ayede Ekiti–Oye Local Government, might be a barrier noting that "Governorship is meant for the whole 16 local government while senatorial position is for the five local governments areas involved.

Evangelist Bobade declared that it would be calamitous  for the APC  -a political party who conducted free and fair credible governorship primary election for 33 Aspirants in Ekiti State to  unilaterally pick flagbearers for National Assembly election. He said it would have been worst for APC if President Buhari had handpicked an Aspirant among the 33 contenders then.

He reiterated that the effect of equal opportunities given the aspirants to contest the governorship election was significant to the outcome of the poll where  the APC defeated the PDP with the margin of over 19,000.

The Leaders who spoke with our reporters therefore advised the stakeholders to uphold the tenets of Democracy.
News