‎Rescue Us From Poverty, Residents Plead With Fayemi In Campaign Trail ... As Fayose's Chief of Staff Loses Supporters To APC

"We have been left to hunger and joblessness since you left government in 2014. We pay heavily for our health. We can no long send our children to school. Our roads are no longer motorable. There are no drugs in our hospitals. All the developments initiated in 2014 are still at the same stage of implementation."
These were the words of lamentations by the residents of Irepodun/Ifelodun and parts of Gbonyin Local Government, including Ijan and Iluomoba,  as the governorship candidate of the All Progressives Congress (APC), Dr Kayode Fayemi, in a campaign trail that took him to  towns and villages in the two local governments, promised to rekindle their hopes that the lost glory of Ekiti will return if voted into office in the July 14 poll. 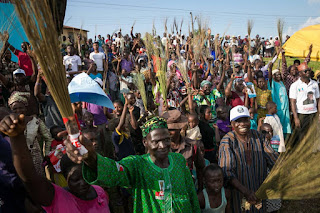 At Eyio-Ekiti, where the residents praised the deputy governorship candidate, Bisi Egbeyemi, for personally donating money to complete their road more than a decade ago, Fayemi assured the people that the road project he initiated but abandoned by Fayose from the same local government would be completed.

Fayemi also promised to continue all his social service programmes, including social security for the elderly people, YCAD, volunteer scheme, entrepreneurship scheme, rural development, road construction and health services while workers and  teachers will start to enjoy regular pay and promotions. Pensioners will receive their entitlements regularly.
He debunked insinuations by the opposition that he would ban okada operations and sack teachers and local government workers if he wins the election.

"You are all my witnesses that I am a promise keeper. I have not changed from what you have always known me for. I will never ban okada or sack teachers and local government workers because I am not a promoter of sufferings.

"I made salary payment my priority, including securing World Bank assistance to pay teachers' rural posting and core subjects allowances. We shall continue to fulfil this obligation, including looking for new ways to promote the welfare of all categories of workers," he said.

In their large numbers, Ekiti State University students stormed campaign rally at Iworoko to express support for Fayemi to return good old days to the university.
The students demanded for reduction in fees and charges,access roads and electricity, regretting that Fayose had unleashed untold hardships on them, including prohibitive charges and failure to pay staff salary, which crippled academic activities for four months.

Fayemi regretted the deterioration of facilities in the university town and the school itself, and promised to improve facilities, including electricity, on the campus while students unionism will be allowed to thrive and charges reduced.
He urged the students to collect their PVCs and mobilise to vote on July 14, reminding them to change their lives for good by voting for APC.

"We shall ensure that our youths are gainfully employed. Instead of banning okada, I will introduce measures that will allow them to do their job better, including provision of helmets and good access roads."

In all the communities where Fayemi addressed rallies, gale of defections swept through PDP, particularly in Iworoko, Igbemo, Iluomoba, Ijan and Are-Ekiti, Fayose's Chief of Staff, Dipo Anisulowo, where he lost his main backers in his country home, including Irepodun/Ifelodun Local Government Youth Leader, Sola Olowojebutu, in company of the PRO, Adeyemo Adeola; Youth Leader, Eze Victor Ifeanyi; former Women Leader, Idowu Adu and 23 other leaders.

They said they left PDP because "Anisulowo is a selfish leader you can't gain anything from", while at Ijan-Ekiti,  PDP lost two former ward chairmen to
News