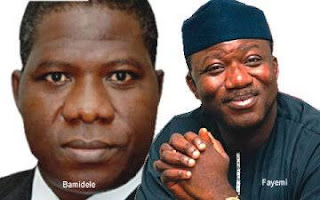 Ekiti Collective Vision for Sustainable Development and Advancement Initiative (ECV) has made a clarion call to all Ekiti Sons and Daughters home and abroad to resist POLITICAL BLOODSHED in the State.

In a statement made available to the Press by the President of the group, Honourable Leye Ogunseyin through the Director, Media and Publicity Honourable Ayodele Michael on the 2nd of June, 2018 in Ado Ekiti, the President of the group condemned the incident that happened on Friday 1st of June, 2018 during the Welcoming Party of Dr. John Kayode Fayemi who is the Governorship flag bearer of All Progressive Congress (APC) in the forthcoming Governorship election of 14th July 2018 in Ekiti State; where gunshots were fired, severely injuring some Ekiti indigenes in the rally, including an APC Chieftain, Hon. Opeyemi Bamidele.


The President said: "Ekiti belongs to everyone of us irrespective of our different Political Party affiliations", we should be able to defend and uphold our core values, which we are known for in Ekiti as the fountain of knowledge and Land of Honour.


"Many things may not be clear to Ekiti people, but one thing that is sacrosanct is that; whatever happens in Ekiti now is linked to the forthcoming July 14th election as Ekiti decides, says the group".


He emphasised that "Ekiti land should not be used as a political battle ground, where lives and properties will no longer be safe, with residents living in fear. He said that Call to public Service should not be a do or die affairs".


The group however enjoined the good people of Ekiti State to shun any political activities that can cause violence in the State.
News