Ekiti Govt Has Failed the People, they Are Hungry - Aribasoye... As EDF Empowers 230 in Ekiti.

The coordinator of the Ekiti Development Front (EDF), a Non Governmental Organization, Barrister Adeoye Aribasoye has condemned the government of Ekiti State and said they have failed the people.

He made this statement at the Ekiti Development Front (EDF)'s empowerment programme held at the EDF Office, opposite Olaoluwa Muslim Grammar School in Ado-Ekiti, the state capital today, June 12, 2018. This programme was also organised today to commemorate the Struggle for True Democracy and mark the significance of June 12 as a day Nigeria witnessed true democracy, in an election that produced MKO Abiola as the winner but was annulled by the Military. 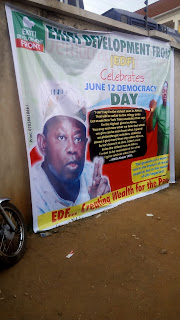 The EDF program which was said to have kick started few months back was aimed at creating wealth for the people of Ekiti State by empowering them. "We don't believe in giving the people fish, lining them up on the road and giving them one Congo of Rice but we believe in teaching the people how to fish, impacting in their life", Aribsoye said. 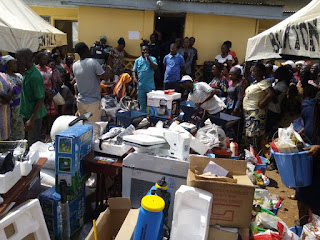 The program which started with social interventions, where several food stuffs and ingredients were given to some randomly picked people in various communities around the state had people both old and young, men and women from various communities numbering 220 empowered. Those empowered were seen rejoicing and singing praises to the EDF and the candidate of the APC, Dr. John Kayode Fayemi as they went home with several equipments like,  Sewing Machines, Grinding Machines, Fertilizers, Cake Mixers, Washing Machines etc. 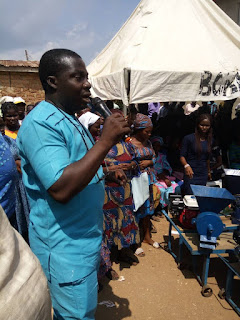 One of the beneficiaries of the empowerment, a woman From Ado-Ekiti, who went home with a grinding Machine in an interview with our reporter said, "I'm Very happy today and I pray for the organizers of this programme and I pray that Dr Kayode Fayemi gets there by God's grace, so that this kind of things can continue. I didn't know anybody here, I just got the form on the floor and I applied and I was contacted to come and get the grinding machine I requested for". 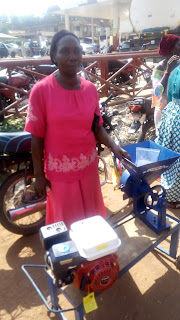 Another Beneficiary who went home with a Cake Mixer said, "I am very happy because I never expected it, like play like play I applied and I just got a message yesterday that I should come and get this cake mixer, and I pray, that by next month by God's grace they will be at the helm of affairs at the government house which is the Oke Ayaba in Jesus Name".

Aribasoye in an exclusive interview with Fountain Newsbreaker said, the empowerment program started some months back and it would continue like that every week even after the election in the state. 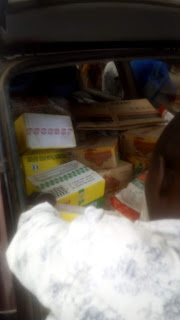 "This project is a 200 years program that will continue even after my demise and our target is that within the next 10 years, every household must have been touched by EDF. I want to say that EDF is not funded by Dr John Kayode Fayemi, but the EDF is in support of Dr. John Kayode Fayemi to be governor of Ekiti state because the Programs of EDF Is in line  with that of Kayode Fayemi, taking about the Social Security for Aged people of 5000 Naira monthly stipends, regular payments of salaries, Non-taxation of pupils and students, free education and payment for WAEC examinations.

"These  are all the things we saw in Dr John Kayode Fayemi and that is why we have decided in Ekiti Development Front (EDF) to give him our support. 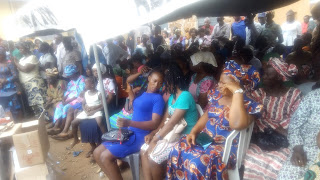 "This program is not limited to empowerment alone, we also go to communities that need to be attended to, in terms of grading their roads, drilling boreholes for them and so on.

"We want the people to know that, the collection of forms is free and the forms can be gotten in our office here, though very soon it will be in all the 177 wards in the State. We have been moving around and there's no community that will not be touched in Ekiti State. As am talking to you over 50,000 people have obtained our forms. The demand is really high but by God's grace we will make sure every one benefits from this program, the entrepreneurs, civil servants and the youths, everyone is welcome.