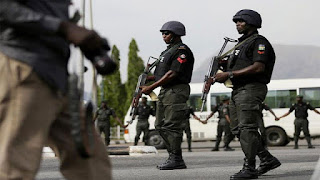 The policeman that released the shots that injured a former member of the House of Representatives, Michael Opeyemi Bamidele and five others at a reception rally by All Progressives Congress for its governorship candidate, Dr. Kayode Fayemi, has been dismissed from the Force.
The Commissioner of Police, Ekiti Command, Mr. Bello Ahmed, announced this while featuring on a live television programme, on Monday.
CP Ahmed, who was interviewed via the telephone by the television station on the morning show, said “the policeman involved is dismissed already and even though he’s nursing some injury; and at the appropriate time, he will face the law of course. Nigerians will be briefed on the outcome of our actions.”
Ahmed also explained that the politician that brought the erring cop was also in detention and that at the appropriate time, he would be charged to court.
On measures in place for the coming election in the state, the Ekiti CP said: “We have robust arrangement to regulate and observe these political activities as its unwinding in Ekiti State, in fact in the entire state. We just got a robust deployment of mobile policemen and that will be increased as the campaigns are progressing.
“You know what is on the ground will determine what will be done. If the satiation on ground dictates we behave otherwise, we will do provided it is within the confines of the law. This morning (Monday) I’ll be having a meeting with all the political chairmen. We have programmes for them.
“We are going to regulate every inch of activity in the state. We will not sit down and tolerate any act of lawlessness, whoever is involved. The police, we are willing, competent to take action against any group or persons, either individual or groups as far this campaign is concerned.”
Reacting to the contention in some quarters that the incident was an attempt to assassinate some people, particularly Dr Kayode Fayemi, CP Bello Ahmed said it was not the truth and warned against “making politics out of situations.”
He said: “It’s not true. We shouldn’t be making politics out of situations. As far as we are concerned, it’s a major incident and it’s an isolated matter. I advise everyone, we shouldn’t make politics out of this incident. The policeman is arrested, in fact, he was almost lynched if not for our quick response. The other party member that brought him from Lagos too is arrested. So, there is no politics we should make with this incident.”
In a related development, CP Bello met with political party leaders in his office in Ado Ekiti, on Monday as he announced in the programme, and warned them against going against the rules governing the conduct of elections, to prevent anarchy in the state.
Ahmed said the command would not “fold its arms and allow people to breach the 1999 constitution and the Electoral Act in the name of election.”
According to him, the meeting was convened for stakeholders to brainstorm on how to ensure peaceful conduct of the coming governorship election and that the Riot Act had been read to them to serve as a guiding principle.
He said: “What I want from men is professionalism. We are going to be guided by the instrumentality of the law because this election is going to be a different ball game.”