Governorship Candidate of the Social Democratic Party (SDP) in Ekiti State, Mr. Akinluyi Oladele Ayegbusi (AOA) yesterday, Thursday June 7, 2018, at the Flag-Off Rally of his party promised all government workers in Ekiti State that if voted in, his government will not pay lip service to their welfare and promised to turn around the fortunes of Ekiti State and set a standard for other Governors in the Country to emulate. 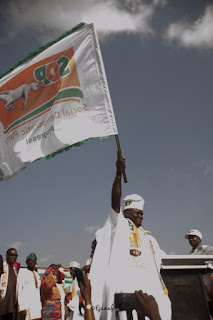 This  was part of the promises he made during the official flag-off of the SDP governorship campaign in Ekiti State. The event which attracted various dignitaries and big wigs in the party was held at the state pavilion with the veteran Fuji musician, Saheed Osupa and Gbenga Falope Junior were on standby to entertain the guests at the venue with their various brands of music.

While addressing party faithful’s that graced the occasion, the party leaders present promised to stand by their governorship candidate in Ekiti State, and his deputy (Princess Yemisi Adetayo Adefolalu) by giving them all necessary support needed to win the July 14th gubernatorial election in Ekiti and make sure that their candidate in Ekiti delivers qualitative governance to the people of Ekiti State based on the party's ideology.

According to Alhaji Shehu Musa Gabam (the National Secretary), he said SDP has come to stay in Nigeria, the party has come to take over governance at all level in Nigeria starting from Ekiti and Osun States. He urged the people of Ekiti to come out in their large numbers, most especially the youths and vote in one of their own come July 14th under the NotTooYoung to Rule agitation.

Former Minister of Defence,  Dr. Olu Agunloye who was also present, said Ekiti State was one of the 10 poorest States in Nigeria, and the poorest in South West, due to bad leadership and that SDP was in Ekiti to give the people of Ekiti hope by taking them out of poverty to real prosperity.

Also, Engr. Bisi Aje said that SDP in Ekiti will not promise the people of Ekiti State what they will not be able to deliver because SDP is not given to frivolities.

The State Organizing Secretary for SDP Adamawa State, Mr. Aziz Jibrillah while addressing the press said that SDP as a party is fully prepared for both the July 14th Ekiti gubernatorial election and 2019 general elections and that they are going to give all it takes to win the elections because both PDP and APC have failed the Nation, and that SDP as a new party is ready to put smiles on the faces of Nigerians most especially the young ones.