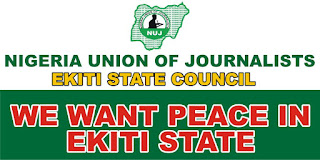 To forestall violence in the forthcoming July 14 Governorship election in Ekiti, the State Council of the Nigeria Union of Journalists (NUJ) has organised a Peace Advocacy Rally today in Ado Ekiti.

The rally which was sponsored by the NUJ Ekiti council in conjunction with the NYSC and some NGOs started from the NUJ Secretariat got through Irona, Ijigbo, old garage okeyimi to Okesa all in Ado Ekiti and It was rounded off at the Secretariat at about12 noon.

According to the leadership of the Union led by Comrade Rotimi Ojomoyela, the rally was not politically Oriented but to preach advocate peace during the forthcoming election in the State.

In the spirit of solidarity, members of the public, labour leaders, NGOs, Corps Members and lovers of peace also joined the train of the rally.
News