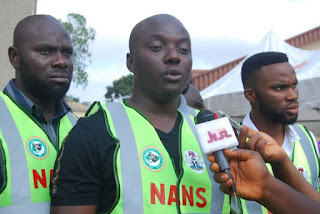 ‎The students’ body gave the ultimatum in a statement signed by ‎Taiwo Bamigbade, NANS Senate President and Abdulakeem Rufai‎, Clerk of the association on Thursday in Abuja.‎‎
‎‎
They said NANS had patiently watched how after five years of graduation, the NOUN law graduates had been denied admission into the Nigerian Law School as provided in the NOUN students handbook, which is a legally binding contract.‎

‎The students said that NANS had through a communiqué addressed to President Muhammadu Buhari called on him to use his good offices to ensure the matter was resolved.
‎
‎”We make bold to remind you, Sir, that the university was established by the Federal Government of Nigeria, accredited by the National Universities Commission (NUC).
‎
“Off course, NANS as a body is not concerned on the continuation of law programme in NOUN if opposed by the professional bodies.

“But strongly disagree those innocent Nigerian students, who suffered themselves with their hard earned money to undertake an accredited course of study in NOUN as promoted by the Federal Government, will in any way be jeopardized. We say NO, NO and NO.‎

“In the light of this, NANS as a body will no matter the price fight against this prolong injustice, intimidation and mischief.

“If after the forthcoming August 2018 admission, the innocent NOUN law graduates are still excluded from lists of intakes into the Nigerian Law School, ‎thus three months ultimatum to do the needful.‎‎
‎
“We, therefore, implore you Sir, to use your good offices as a matter of urgency to resolve the lingering crisis as NANS will no longer tolerate any excuses or tactical delays.”‎
‎
‎The students’ umbrella also recommended to the Federal Government to close down the two institutions; NOUN and Nigerian Law School, if they had become tools of oppression against the Nigerian students.
‎
‎According to them, it amounts to fraud, deceit, discrimination and mischief against Nigerian students and inhumanity to vulnerable citizens to formally admit and graduate them with deficient certificates after several years of studies despite financial implications.
‎
‎The News Agency of Nigeria (NAN) recalls that ‎the judgment of Justice Hilary Oshomah of the Federal High Court Port-Harcourt, Rivers on October 4 , 2017, hands-off the matter to the academia to resolve.

The bodies include the National Universities Commission (NUC), Council of Legal Education (CLE) and the Federal Ministry of Education.‎

‎However, the decision of the court did not go down well with the NOUN, Law Graduates Forum, who stated that the court unconsciously renounced its jurisdiction on all academic and students’ matters.

The forum also frowned at the nonchalant attitude of the three academic bodies in resolving the misunderstanding despite the judgment‎.

The letter was copied to the Senate President, Dr Bukola Saraki and Speaker, House of Representatives, Mr Yakubu Dogara.

Others are: The Minister of Education; Executive Secretary, National Universities Commission; Director-General, Nigerian Law School and the Vice-Chancellor, NOUN.‎
News