The Governorship Candidate of the Social Democratic Party (SDP) in Ekiti State Mr. Akinloye Oladele Ayegbusi who was on Tuesday May 22nd, 2018 welcomed back to the State from the Headquarters of his party in Abuja where he went to collect his Nomination form has said he is destined to Bring the People's Democratic Party and the All Progressive Congress Down in Ekiti State.

In a motorcade rally like, Ayegbusi was ushered into Ekiti State from Akure through Ikere Ekiti before arriving at the city of Ado Ekiti amidst excitement and encomiums been poured on him. Despite the fact that Ayegbusi is a new comer into the political arena of Ekiti State, the manner he was able to defeat the old politicians who contested with him at the Primary Election of the Social Democratic Party still leaves one to wonder and imagine the method he deployed to achieve his laudable, significant and outstanding victory.


Apart from the fact that Ayegbusi is a very young person of the age of 44 years old, the fact that he could equally emerged as the Governorship Candidate of the Social Democratic Party in a very free, fair and transparent primary election process and of a political party been considered, nurtured and projected to be the 'third political force' as Nigerians prepares towards another general elections in 2019 could also have said to be very unique and special that the Ekiti electorate must pay a full attention to come July 14th, 2018.

If we are to say the truth, this we can say is the very first time in the history of Ekiti State since its creation that a young person of his age would show up in a party of the status of the Social Democratic Party to face a fierce contest and still able to miraculously emerged with a landslide as a winner. In my own humble and simple opinion.

One of The Youth Leaders present at the welcome rally said: "I think the time has come for Ekiti people most especially, the youths to think very deep and consider somebody of their age status to be elected the next Executive Governor of Ekiti State. This is the best time for the youths of Ekiti State to get it right and associate with the person of the same mind and view with them.


"The youths of Ekiti State should know that the time has to come and riped enough for them to take over the Governance of Ekiti State and jettison the old and the selfish political elements in the State who are bound and desperate to calve out a niche for themselves and form a political empire that will forever subject the entire Ekiti people and most especially the youths into an economy slavery and servitude and continue to recycled themselves, their families, children and surrogates into political positions and powers at the expense of this generation. Those who have made up their minds to seat on the destiny of Ekiti State to continue to trade and do business and giving out peanuts to blindfold the people from the original should this time around be shown the way out.


"If the youths of Ekiti State refused to get it right come July 14th to vote in a young person of like mind with them, it is no doubt going to be a very disastrous situation. And who knows when such a great opportunity will beckon on them again. It is a public view that the old and the selfish politicians in Ekiti State should be contented and satisfied with the uncountable wealth and resources of the State that they have been able to accumulate and acquire for themselves and their children children.


The entry of Akinloye Oladele Ayegbusi as the Governorship Candidate of the Social Democratic Party into Ekiti State on Tuesday has equally received the Royal blessings of the Ewi of Ado Ekiti, Oba Rufus Aladesanmi and all his High Chiefs. The Ewi opined that his presence at the Palace was indeed a very good beginning for him to start his political career on a good template and commended his nature at which he comported himself as a cultured Yoruba Man. At the Palace, the Ewi of Ado Ekiti wasted no time to expressed his satisfaction at his emergence as the SDP flag bearer in the July 14th Governorship Election.


The joy and smiles that radiates on the faces of his supporters and members of the public from where the motor - arcade took off at the boundary between Ikere Ekiti in Ekiti State and Iju Ita-Ogbolu in Ondo State reveals that of the surprise and enthusiasm that were displayed by the people on his age status as the Governorship Candidate of a political party like that of the Social Democratic Party (SDP).


At the State Party Secretariat of the Social Democratic Party (SDP) in Basiri, Ado Ekiti; Ayegbusi promised the Ekiti people a better time in the State if elected on July 14th, 2018. He promised to put an end to economy slavery, servitude, unpaid workers salaries, stop the misappropriation of the State resources to private pockets and focus on job creation to alleviate the sufferings of the Ekiti youths. He also promised to ensure the revamping of the old industries in the State and bring about the establishment of new ones.


He equally "promised a total turn around in the Agricultural Sector and going to bring about the re-introduction and re-invention of the policies experienced during the Chief Obafemi Awolowo period such as his free education policies which will help to restore the educational values that the State is known for in the Country, Nationally and Internationally and take the youths off the streets". "Promised to create enabling environment that will restore the Ekiti educational values and take government back to the people who will elect us in as their next Governor and will bring about the introduction of the Public Private Partnership (PPP). When asked if he did not feel threatened by the PDP and APC while answering questions from the Press, he said: "the PDP and the APC are just mere names and I am destined to bring them down because both of them are like Goliath". He equally expresses hopes that Ekiti will be great again because he believes in it.

His Official Campaign flag off is been expected to hold on Saturday at the Kayode Oluyemi Stadium in Ado Ekiti. 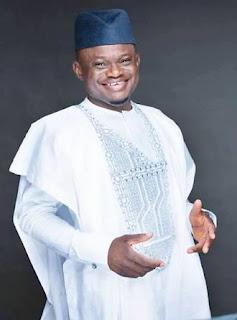