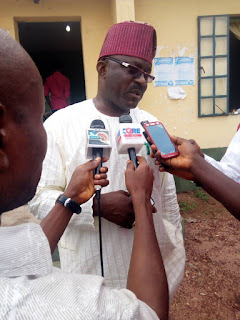 It was a jubilation galore today as the Ekiti State Governorship election Appeal Committee of the All Progessive Congress (APC) cleared Mr Victor Olumuyiwa Kolade aka VOK who was earlier disqualified.

The efon Alaaye born legal practitioner was disqualified alongside two others during the screening exercise conducted for 33 APC aspirants in Abuja last week.  The aspirant who promptly petitioned the Appeal Committee headed by Hon Abuzarri Ribadu was cleared on May 2, 2018.

In the clearance letter made available to Fountain Newsbreaker and signed by four out of the five members of the Appeal Committee, Kolade's appeal was considered to have merit. Those committee members who signed the letter are: Hon Abuzarri S. Ribadu (Chairman), Dr Tunde Esan (Secretary), Hon Eden Selong and Hon Kayode Oseni.

The two paragraph clearance letter States inter alia: "the Screening Committee, after interfacing with you and thorough consideration of all available records concerning you, hereby states that you are cleared and qualified to contest the primary election of the party that comes up on the 5th of May, 2018.

The Secretary of the Committee in telephone chat confirmed the development to Fountain Newsbreaker. According to him, "only three people are needed to sign but four out of five of us signed because the fifth person wasn't around"

Dr Esan disclosed that two out of those disqualified were given clean slate by the Appeal committee, namely: Victor Olumuyiwa and Muyiwa Coker. This has finally put a rest to the information surrounding their disqualification.
News