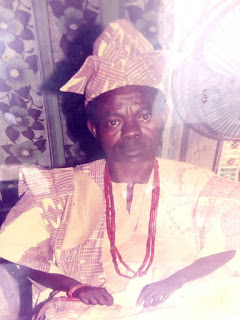 High Chief Adebisi Peter Ademiloyo, the Anaun of Ilumoba-Ekiti who is also the father in law to the Assistant Editor of the News Agency of Nigeria (NAN), Mr Remi Koleoso, has passed on.

The seventh day ceremony (IJE) of the Anaun of Iluomoba-Ekiti in Gbonyin local government area of Ekiti state will hold on Saturday, April 7, 2018 at his residence, L4/Okenaun street, Iluomoba Ekiti.

High Chief Ademiloyo died on a Good Friday, March 30, 2018 during a brief illness and was buried the same day according to the tradition of the town.

The late Anaun was a retired police personnel before he went into full time farming until he breath his last.

He was survived by one wife, Chief (Mrs) Roseline Abiodun Ademiloyo, the Eyelori of Anaun quarters as well as children, grandchildren, among whom are Mrs Bolanle Koleoso, the current Regent and wife of an Editor with the News Agency of Nigeria, (NAN) Mr Remi Koleoso, Mr Segun Ademiloyo, Mrs Funso Babalola and Mrs Kikelomo Adeyinka.

The final burial ceremony will however be announced in due course