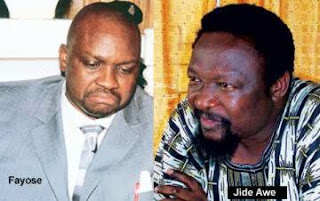 After a protracted murder trial of the state chairman of the All Progressive Congress in Ekiti chief Jide Awe and two others which lasted for almost four years, an high court Ado-Ekiti precised over by Justice Bamidele Omotoso has discharged and Acquitted the APC chieftains.

Awe, his aide, and other members of the APC have been on trial for alleged murder of late  Madam Juliana Adewunmi,  and Murphy Jeje, a member of the Peoples Democratic Party (PDP) in 2013. Late Madam Adewunmi was the mother of Mr. Segun Adewunmi, current  Deputy Speaker, Ekiti State.

Ekiti State Attorney General and Commissioner for Justice, Kolapo Kolade, at the High court 7, Ado Ekiti, before Justice Bamidele Omotosho, filed an application for the withdrawal of the case against Awe on Wednesday.

He said the state was withdrawing the case in order to promote peace and brotherliness among the people of Erinjiyan Ekiti, which is the community where both the complainant and the defendants in the matter hailed from. He also said governor Fayose consented to the withdrawal of the case in spite of political differences because of his belief in posterity, peace and welfare of the people of the community which was said to have been divided over the court case.

Justice Omotosho, while granting the nod for the A.G's application said the court supported  the development because it was to promote peace.

Speaking with newsmen on the development, Kolade said: "What happened in court today is far beyond politics, the governor in his usual characteristic  manner of promoting peace and brotherliness in all communities in Ekiti and across party lines has intervened.

" In this matter, so many good people across  Nigeria, even the defendants in this matter, has appealed to his Excellency to intervene in this matter, particularly in Erijinran, more so as the  defendants and complainant are of same family, the complainants has given the to ahead and said the matter should be withdrawn. This  development equally supports the cause of justice. One of the cardinal principles of justice is promotion of peace.

One of the defense counsel on the matter, Ibrahim Kunle Olanrewaju, said: "reason seems to have prevailed today; the Attorney General himself came to court to withdraw the charge. And by the provision of our law, the court was left with no option, than to discharge and acquit the defendants. This simply means that this charge can’t be filled in any court again.  Like you all know the genesis of the case.  We are not saying that somebody was not killed or murdered, but we all know that it is more of political fight than looking for justice.

Taking from the words of the attorney general himself, he said that they are trying to allow peace to reign in the community and to promote good neighborliness and we support it. In the defendants have no business to be charged. But we salute the state for doing this, we salute the courage of the attorney general for the bold step and we salute the courage of our lord Justice Omotoso for discharging and also acquitting the defendants. He could have just discharge without acquitting them."