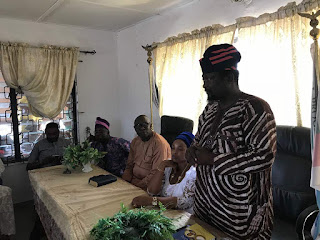 The State Executives Committee of the All Progressive Congress (APC)  in Ekiti  State has passed a vote of confidence on High Chief Jide Awe, the State Chairman of the Party for his forthrightness, doggedness and commitment to leading the party to electoral successes. This was also extended to his deputy, Erelu Kemisola Olaleye who held forth for him in his absence

Awe who was recently discharged and Acquitted of murder case by an Ekiti Federal High Court was conferred with the honour at the Executive meeting held on Monday,  16th April,2018 at the States Secretariat of the Party, where other several other resolutions were made.

Chief Jide Awe was recognised as the  rallying point of the party in Ekiti State and his position as recently espoused about the coming party primary during the visit of the national chairman is in tandem with the   thinking and aspiration of majority of the party leaders and members.

The deputy chairman , Chief Mrs Kemisola Olaleye who was acting on behalf of the State Chairman during his absence was commended for her courage , outstanding quality and performance in the handling of the party's affairs during the Chairman's absence over a trump up political charges

The duo of the chairman and his deputy were reassured of the Exco's support and loyalty as they move closer to the party primary to select the flag bearer and the governorship election coming in July.

All aspirants and party members were hereby advised to make their campaign an issue based, and that any member or aspiring member of the party involving in blackmail or hate campaigns as a means of attracting members/public support will be disciplined in accordance with the provision of the party constitution.