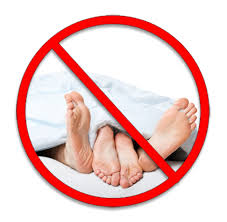 There was Pandemonium in Idemo Street in Ado-Ekiti today, the state capital when a middle aged man Obele Oso died during a sex bout with a married woman who is a mother of two. The incident occurred this afternoon, when the father of one, allegedly invited his long time woman-friend for sexual intercourse. The woman name Memunat who is also married to the friend of deceased reportedly started the illicit affair with Obele a few months ago.
The Ebira woman who according to one of Obele’s friend who granted our reporter interview, said she is fond of sleeping around for cash. This afternoon the duo according to another eye witness, Sola, entered into Obele’s room and after about fifteen minutes, the woman ran out half naked which made the neighbours suspicious.
On getting to the deceased room, he was found gasping for breath and all efforts made by sympathizers to revive him proved abortive and he later gave up the ghost. As at the time of filing this report, efforts are still in top gear to apprehend the suspected woman. A traditionalist called to assess the situation confirmed that Oblele died of thunderbolt.