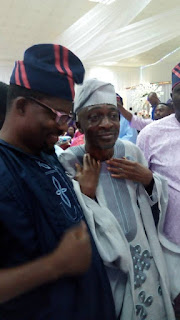 There are wedding ceremonies and there are wedding ceremonies. Leaving Ado Ekiti for the wedding ceremony of the daughter of the former Chief of Staff to the erstwhile Ekiti State Governor in Ibadan, I never, in my widest imagination, thought I was going for a sort of mega rally, replica of Buhari's presidential campaign in 2015 where every guber aspirant struggled to showcase himself. Getting into the 2000 capacity Jogor Hall, I was confused because I found it difficult to actually say whether I SAS in for a wedding or a political panorama. 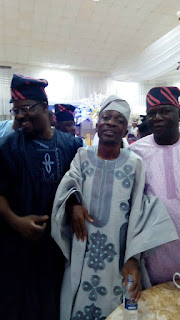 Despite the tight screening by the security operatives at the entry port of the reception, the whole seats reserved for the beautiful bride inside the hsll had been fully occupied. We had no option than to hijack seats reserved for the bridegroom and interestingly enough, the groon's were also accommodating. So there was no demation in any way between the two families. Whichever side you turned to you would see the creame de la in the political space of Nigeria, traditional rulers in Nigeria, gubernatorial aspirants from Ekiti, former Governors, APC Women Stakeholders, former Commissioners, erstwhile council bosses, ex-lawmakers, mention them! Cyber wizards, local and foreign paparazzi were scampering for space to do what they knew best to do. 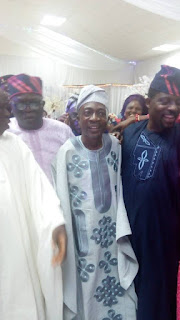 Lest I forget, a scene was almost created between me and my Oga at the top on the high table where seated the party Chairman, High Chief Jide Awe, former Governors: Otunba Niyi Adebayo, Kayode Fayemi and Erelu Bisi Fayemi. It was a funny episode but in order not to derail the focus of this piece and as a mark of honour to our Erelu Bam Bam, the gist is better parried.

Back to the main gist abeg, the party can better be tagged a UNITY PARTY. You wanna ask me why? All the political gladiators in Ekiti met there and embraced one another. Even those who considered Adaramodu a turn in their flesh were there in their fledging Agbada and Aso Ebi cap to match. Will it then be correct to say that Yemi Adaramodu is a unifying factor in the politics of Ekiti as he appears like the beautiful bride at the event? I heard some people saying it's all about relationship. It was like a day of harvest for the Stakeholder women as they were dancing joyously from one table to another. 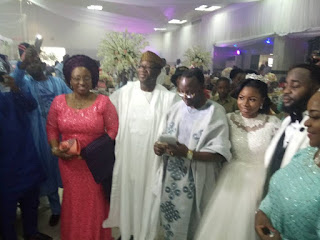 I also noticed some royal fathers physically present among whom are the Alawe of Ilawe and the Olupole of Ipole Iloro Ekiti where Yours Truly is the Akogun of Aafin. Please forgive me for not mentioning the names of other Obas who I saw in their crowns and beeds but for the red wine that had started settling down in Yours Truly too - no be story I go write o, na to go and just keep flenjo!

Before I round off, something caught my attention the following day of the wedding. This time around, it wasn't politicians that created a scene it was the mother of the bride herself, Mrs Adaramodu. I know you are already wondering if na dem house I sleep. Lol! It was at the Thanksgiving at the broaPrayer Hall, RCCG at Odo Ona Elewe. When the Officiating Pastor asked the newly wedded couple if they had any special message, the new wife asked us to shout 21 Allelujah. Just as I was about rolling of my sleeves in preparation for this task right in front of the alter, I  saw the brid's mother who was wearing white lace as she was rolling on the pulpit! What happened? While would this woman  create scene on this special day of her daughter? She told the Pastor that she had vowed to roll on the floor if He could make the marriage a grand success. Gentlemen, on getting to the Aerodrome home of the Adaramodus, another scene was created by Ibitoye, Atibioke, Ajaja, Olorunleke, Babinton, Eye Faje, Funke Owolabi and before l packed my bag and baggages and drove away jeje.
Entertainment News Photo Speak