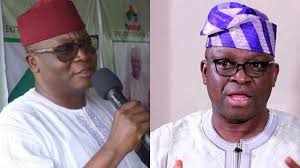 A former  National Publicity Secretary of the Peoples Democratic Party, Prince Dayo Adeyeye, has accused the Governor of Ekiti State, Mr. Ayodele Fayose of trying to muscle the party in the state.

He, therefore, called on the national leadership of the party to call Fayose to order.
Adeyeye accused the governor of harassing other members of the party that do not belong to his group.

The former minister of state for works, stated this in a statement by the Media Director of Prince Adedayo Adeyeye Movement, Chief Niyi Ojo, a copy of which was made available to our correspondent in Abuja on Friday.

Ojo accused the governor of making life difficult for the people, insisting that Fayose had become a pharaoh in the state.

He said the actions of the governor, if not checked, could make some members of the PDP to defect to the All Progressives Congress in the state.

While quoting Mo Ibrahim as saying that “intimidation, harassment and violence have no place in a democracy,” Ojo said “we wish to draw the attention of the national leadership of our great party, the Peoples Democratic Party to the violation of the above words of wisdom and sustenance of democracy  by the Ekiti State Governor, Mr Ayodele Fayose who has become a Pharaoh in the state.

“We are worried that a sitting governor who has refused to make life comfortable for the people of the state, will shamelessly  prevent good gesture by other party members in ameliorating the problems of the citizens of the state, and the PDP members in particular.

“PAAM wishes to condemn in clear terms the harassment being visited on party members by the governor who has been arm-twisting them across the 16 Local Government Areas of the state, forcing them to reject palliative Christmas gifts from other party chieftains while he, as a governor, has refused to help their cause.