The President of the National Industrial Court, Justice Babatunde Adejumo who ruled against the sack of Dr Martins Olufemi Thomas as Executive Secretary of the National Health Insurance Scheme (NHIS) has disclosed the reason why he decided to hear the case himself.

In his comments in open court after the judgment in Abuja, the judge said that as president of the NIC, he decided to hear the case himself because of its high profile nature and the public interest

In the judgment delivered on December 18, 2017, the court held that the employment of Dr Femi Thomas with the NHIS enjoyed statutory flavour and his removal by the President through a broadcast by his media adviser before the end of his five-year term and without giving him any hearing at all was illegal and arbitrary. 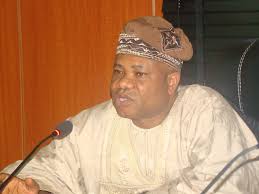 Thomas who was appointed on November 20, 2013 was relieved of his appointment by President Goodluck Jonathan on April 27, 2015 through a broadcast by Dr. Reuben Abati, Special Adviser to the President on Media & Publicity. He, however, challenged his sack by suing the Attorney-General of the Federation and the NHIS, asking the court to determine that having regard to the clear provisions of Section 8(2)(c) of the National Health Insurance Scheme Act, CAP N42 Laws of the Federation 2004 vis-avis his letter of appointment dated November 20, 2013, whether his term of employment as the executive Secretary is fixed for a term of five years.

The plaintiff through an originating summons filed by his lawyer, Mr. Bode Olanipekun, also asked the court to determine whether his purported sack vide a press briefing/statement or television broadcast on April 27, 2015 without any hearing from him does not violate his right to fair hearing under Section 36(1) of the Constitution of the Federal Republic of Nigeria, 1999 (as amended).

He, therefore, prayed the court to declare that his appointment on November 20, 2013 as the executive secretary pursuant to Section 8(1) and (2) of the NHIS Act was an employment with statutory flavour and fixed for a term of five years.He also asked the court to declare that his appointment as executive secretary could not be terminated without first affording him fair hearing or an opportunity to be heard.

Furthermore, the plaintiff prayed the court to declare that the purported termination of his appointment was irregular, unlawful, illegal, unconstitutional, null and void and of no legal effect whatsoever. He also asked the court to set aside his purported removal and reinstate him as the executive secretary to complete the remainder of his five years term out of which he had only spent one year, four months and seven days.

He also asked the court for an order mandating the defendants to compute and pay him the totality of all his salaries, benefits, emoluments and entitlements for the unused part of his term in office. The plaintiff also asked for the sum of N5 billion for exemplary damages. He added that the court should order the defendants either by themselves, officers, agents, servants or through any person or persons acting on their behalf from treating or continue to treat him as a removed executive secretary.

Opposing the originating summon, the defendants filed an eight paragraph counter-affidavit deposed to by Abubakar Sadik Adam and a written address dated January 1, 2016.Defendants formulated three issues for determination, which were that the appointment/employment of the claimant was not one which enjoys statutory flavour but a mere one at the pleasure of the President of the Federal Republic of Nigeria.

Defendants also raised the issue of jurisdiction and cited the cases of Fakuade v. OAUTH (1993).They also averred that the President, in terminating the appointment of the claimant in the manner it was done had only exercised a discretion allowed in the law. Delivering the judgement, Adejumo dismissed the objection to the court’s jurisdiction filed by the second defendant and upheld the arguments of plaintiff‘s counsel, Mr. Bode Olanipekun, urging it to affirm same.

The judge held that though it had the power to reinstate the plaintiff, it would not do so and therefore refused the prayer for reinstatement but it ordered that the plaintiff be paid all his salaries, benefits, entitlements and emoluments for the unused part of his five years term.

The court also awarded post-verdict interest at the rate of 15% until settlement of the judgment sum and refused the prayer for exemplary/punitive damages even though it held that the plaintiff ‘s removal was outrightly illegal and unjustifiable in a country subject to the rule of law.

Reacting to the judgment, Bode Olanipekun said: “It’s a characteristically bold decision of the court in absolute alignment with the rule of law and in defense and protection of the Nigerian citizenry against executive arbitrariness. The decision is a warm reassurance of the assertive position of the judiciary as the upholder of the rule of law to deflate the rule of might