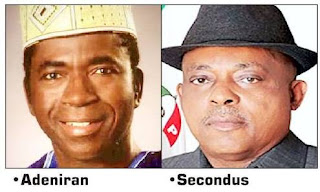 Former Minister of Education Education, Professor Tunde Adeniran is to coast home victory at the People's Democratic Party's convention with protest votes from the South West against Governor Nyesome Wike's alleged reckless statement against the region.


While drumming support for the South East Candidate, Prince Uche Secondus, the Rivers State governor had described the South West as the "problem of PDP" .  This did not go down well with leaders from the South West who met to present a single candidate.

Earlier in the week, Northern Elders in the PDP had met to endorse a South West aspirant in what they called "Micro zoning of the positions".  Delegates from Lagos had also endorsed the former Deputy Chairman of the party, Chief Olabode George.

However, the likes of former Governors of Ogun and Oyo States, Otunba Gbenga Daniel and Senator Rasheed Ladoja stepped down to support Professor Adeniran two days ago.  In another twist of event, former PDP governorship candidate of Lagos State, Chief Jimi Agbaje and Chief Bode George withdrew from the race in protest yesterday over a verbal attack by Governor Wine among other reasons

It will be recalled that Governor Nyesom Wike of Rivers State declared on Friday that there was nothing like micro-zoning arrangement in respect of the national convention of the Peoples Democratic Party (PDP), holding in Abuja today.

Speaking on Sunrise Daily programme of Channels Television, on Friday, he noted that former Acting National Chairman of PDP, Prince Uche Secondus, would win the chairmanship election because he was the best candidate to drive the party to the next level in view of his experience and track record.

He also declared that the South West was the problem of the party, but added that the party would emerge stronger from the national convention and better re-positioned to provide credible opposition.

He said, “The issue of micro-zoning and gentleman’s agreement does not arise. There is nothing like that. The so-called micro-zoning is being floated by a presidential aspirant from the North, supported by campaign officials of Professor Tunde Adeniran”.

“Anybody who believes in PDP will work for the party after the national convention, whether or not you emerge. You will do otherwise when you are controlled by external forces. No right-thinking party member will resort to issuance of threats”, he said.

He said, contrary to the planting of stories against Prince Uche Secondus by his opponents, the national chairmanship aspirant has no existing issue with the EFCC, having gone to court against the agency and won. He said damages were awarded in favour of Secondus.

“After tomorrow’s (today’s) convention, PDP will come out stronger. It will come out refreshed and re-positioned for the good of the country.

“Somebody who believes that he will win will not resort to writing petitions before the convention. All reports in the media against Secondus are planted and false. Secondus has never said anything negative against any other candidate. He has remained focused on his campaign”, Governor Wike said.

While saying that there is no zone that should be taken for granted, Governor Wike said that the South South remains the bedrock of PDP.

“Only a candidate from outside the South West, such as Prince Uche Secondus, can unite the zone. He has the reach and capacity to unite all factions in the South West. He is the person suited for the party at this time,” he said.

He noted that of all the national chairmanship aspirants, only Secondus is from a state with PDP as the party in government, adding that the other candidates have no political presence in their respective states to drive the revival of the party.

Governor Wike said he resigned his membership of the PDP National Convention Planning Committee because he wants to focus on the campaign for the emergence of Prince Uche Secondus as the national chairman of the party.