Fayose, A Good Politician, Better than Us, But.... - APC Senatorial Aspirant 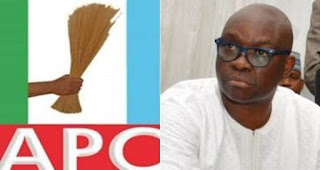 The All Progressives  Congress (APC) Ekiti North Senatorial Aspirant, Dr Olusegun Osinkolu has rated Governor Ayodele Fayose better than members of his own party when it comes to politics.

The politician made this assessment while playing host to the delegates from his senatorial district and leaders of his party over the weekend in Ayede Ekiti, his hometown.

"Governor Ayo Fayose understands politics and he played it better than us, but he is not unbeatable. With the promise by our national leaders that the governorship primaries will be free and fair, I can boldly say that the outcome of that election will definitely shock Governor Fayose and many Nigerians." Osinkolu said

Having admitted that Fayose was better off the leaders of APC when it comes to politics, Osinkolu boasted that APC would use every legal and constitutional strategy to oust the governor and prevent his anointed candidate and the deputy governor, Prof Kolapo Olusola from taking over the reign of power in the State.

The Aiyede Ekiti born politician described the defeat of the former governor of Ekiti State, Dr Kayode Fayemi as "disastrous". According to him, "the disastrous outcome of the 2014 elections, where Dr. Kayode Fayemi lost in all the 16 local government areas was an opener to the party".

He said what the party needed at this time is unity and transparency to overcome its challenges, describing Fayose as a good politician that must be marched in strategies for APC to win in 2018.

“I am a Democrat, I don’t believe in rigging or resort to self-help but I believe if we put our house in order, use the right candidate and strategies, we can easily win.

Speaking further, the Sebatorial aspirant said: “That is why we must listen to what the electorate wanted and not what few leaders in the party want. We must listen to the teachers, market men, and women, Okada riders, farmers, civil servants so that we can come up with the right candidate that can win for us.

“It is not easy to play opposition in a State like Ekiti. We have tasted power and we are now in the opposition and we can conclude that it is better to be in power and this is the more reason why we have to be united and focused for that 2018 dream to be a reality”, he advised.

Osinkolu appealed to Fayose to pay the salaries of workers and stop subjecting Ekiti people to hardship.

“I plead with him not to divert the coming bailout. Let him use it for our civil servants, teachers and local government workers for life to become more comfortable for our people”, Osinkolu said.
News