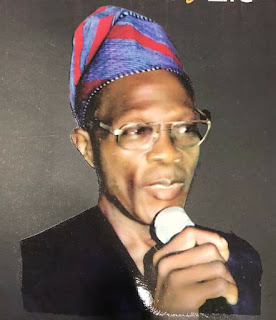 Just as the bible says: sweet is the remembrance of the righteous, torrents of tributes have been pouring in across Nigeria on Reverend Michael Obayemi Kolade who died at the age if 81 and being buried on December 16, 2017.

Rev Kolade who was a servant of God of the Anglican faith till death left behind successful children among who is his first son, Mr Victor Olumuyiwa Kolade (VOK), a prominent lawyer and governorship aspirant under the platform of the All Progressive Congress (APC) in Ekiti.

Speaking with the Fountain Newsbreaker on the demise of his father, VOK disclosed that: "as a practising lawyer for the past three decades, nothing ever shook me like the death of my father. Not because he was too young to die at over 80 years but because he died at a time that was least expected."

The Efon Alaaye born governorship hopeful however took solace in the fact that no one would ever live forever in this world. He said he would forever miss his dad for the spartan life he lived which according to him: "is worthy of emulation". Speaking further, VOK said: "The main virtue which he bequeathed on us is integrity and this is what has been propelling me in all my dealings with the people both in my private and public life".

Apart from notable personalities in the Church of God and other places where baba had lived, a lot of political associates of VOK also extolled late Rev Kolade's virtue.

In a telephone chat, the immediate past Deputy Governor of Ekiti State, Professor Module Adelabu disclosed that: "honestly, I didn't know Baba but someone introduced his son, Mr Victor Kolade to me and l found him to be a very sound and humble person. These traits must have been emulated from his father, who l was told was a man who had the fear of God."

Another APC leader who spoke with our reporter is the former Commissioner for Land and Housing in Ekiti State, Mr Kayode Olaosebikan who said: "even though I never met Rev Kolade in his life time, mere seeing Mr Victor Kolade as a perfect gentleman and humility personified speaks volumes of the kind of person his dad would be in his life time"

The Chairman of APC in Efon Local Government, Mr Deji Oguntuase in a chat with the Fountain Newsbreaker, described late Rev Kolade as "a man of peace who feared God all his life and gave the best of education to all his children". The APC boss said that "the entire Efon Alaaye community where he was born and Ilesa where he lived till his death will remember his contributions to humanity"

Also speaking on the demise of VOK's father, the Chairman of APC in Ekiti West, Mrs Funmilayo Awosina said: "baba was the father-in-law to Bola, my bosom friend and school mate who is the wife to Barrister Victor Kolade. So I knew a bit of Baba before his death because he took my friend like a daughter. I actually met him few months before his death and I knew him as a bridge builder, a philanthropist per excellence, very accommodating, genuine with a good sense of humour. Baba and I flew together immediately he knew I was a friend to his daughter in-laws. All these attributes are also embedded in his son, Barrister Kolade whose sense of humor goes beyond imagination.

On behalf of the Global Sisters' Club which VOK serves as Patron, Chief Mrs Toyin ogunkuade also commiserates with Mr Victor Kolade on the demise of his father, saying that: "those that knew baba said good things about him and that our patron took after him. We are happy to have a kind hearted man like VOK as our Patron and there is no doubt he inherited this virtue from his father".

Former Ekiti State House of Assembly member who represented Ido/Osi, Hon Omoniyi Ajaja, former Chairman of Ado Local Government, Hon Sunday Ibitoye and former Commissioner for Urban and Regional Planning, Elder Remi Olorunleke, all said they never met VOK's father one on one but for the fact that his son had displayed high sense of maturity within the shortest time he stormed Ekiti politics shows that the late reverend had left s great legacy behind.

Specifically, Elder Olorunleke from Gbonyin Local Government said: "Baba Rev Obayemi Kolade was a disciplined man, yet radiates love and compassion. He touched lives and gave hope to people. He preached the Word and acted the Word. His legacies are seeing in the children. May the soul of Baba rest in the bosom of the Lord"

A topnotcher of APC Women Stakeholders in Ekiti and Yeye Kuajo of Osin Ekiti Chief (Mrs) Oluremi Ajayi aka Babinton said: "Pa Obafemi Kolade lived a good Christian life. Though l didn't know him, through his son Barr Victor Kolade you will know that Baba left behind a good legacy. May his soul rest in perfect peace"

In the words of the Yeyeoge of Ikole Iloro and former Special Assistant in the deputy Governor's office, Yeye Yemisi Ayokunle: "Death, they say, is inevitable but painful to those who are left behind. This is true when someone who showed love and care to all and sundry departs. This is exactly the case with Rev Michael Obsyemi Kolade." The Ilawe Ekiti born ace broadcaster further said: "I might not have encountered him much, all I have heard and read about the great man amounts to love and care for everyone around him.
Baba's work is done, his ministry completed and his reward assured."