Behold! The Eyekuajo of Osin Ekiti 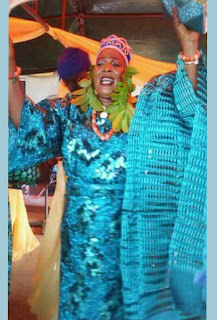 Speaking with the Fountain Newsbreaker, she said: "l want to thank the deputy chairman of our great party Chief Mrs Kemisola Olaleye who saw all the qualities of a virtuous woman to be honoured with such a special title in me and recommended me to her community"

The Eyekuajo also showed her gratitude to Olosin of osin Ekiti, Oba Philip Eniayewu Oyediran and the entire community for the honour bestowed on her.

"I also appreciate my husband and my children for their love and support. I promise not to disappoint them all" she said

Speaking on the basis for which Chief Mrs Ajayi was given the title, Erelu Kemisola Olaleye noted that "the Eyekuajo is a very plain and sincere person who will not say Yes when she means No. She is one woman who is always loyal to whatever cause she believes in. These among others are the reasons why the Olorin in council considered her worthy for this post"
News