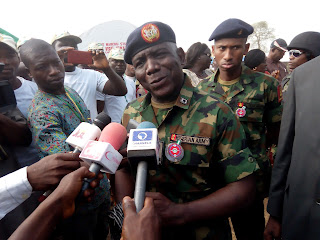 
He said this during his visit to the NYSC Permanent Orientation Camp in Ise Orun/Emure in Ekiti State on the 6th of December, 2017


The DG said he could see future DGs, governors, presidents amongst the corps members. He encouraged them to continue to be of good manners as their coordinator had earlier said about them and take the Skills Acquisition and Entrepreneurship Development (SAED) seriously so as to be self employed and empowered. This according to him would prevent corps members to start from roaming about in the sun looking for white collar jobs.


The NYSC boss enjoined them to always follow due process in whatever they do advising the ladies among them to avoid indecent dressing.

Most importantly, the DG told them to add value to their host communities by involving in Community Development Services (CDS).

In another brief chat with Fountain Newsbreaker, the DG said, "it is the duty of the state governments not the federal government to provide and maintain facilities". Concerning the increment of Corps members' allowance, he said "the Federal government has constituted a committee to look into the  minimum wage issue and immediately they solve that problem I'm sure they will increase the Corps members allowance ".

The DG who arrived at the NYSC Camp at 12:25 noon was received at the entrance of the Camp by the Camp officials and the Quarters guards. He immediately went for inspection, moving around the Camp with the Ekiti state coordinator of NYSC, Mrs. Ukagha Uwano and other NYSC officials.

Amongst the places he inspected were the kitchen, registration hall, the kitchen store, the hostels, toilets, the camp clinic etc.


The Ekiti State coordinator of NYSC, Mrs  Ukagha Uwano in her welcome address said it was a great honour to have the Director General of NYSC   with them on camp. According to her, "a day like that will forever live in the heart of the corps members and in the history of Ekiti NYSC".

Moreover, she said the corps members were well behaved and cooperative. She went further to say, "they also have challenges and those challenges will be forwarded to the office of the DG, who is a father to all."

The DG who was entertained by the Cultural group and the Man O war group of corps members, commended whatvhe saw during his inspection giving ther food a pass mark and adding that "if the food changes from being good, you can call me on my direct line". He then called out his number for them to write down.

The Acting Director from the NYSC headquarters, Mrs Adeyemi Adeyinka who had earlier introduced and ushered in the Director General said the DG  had been moving around all the orientation camps in the country. She said the DG was in Ekiti state orientation camp also because the welfare of the corps members was his priority. She added that the DG always make sure that the security of the corps members was assured.


The 2017 Batch B Stream 1 corps members in Ekiti State Orientation Camp were so happy to receive the August visitor in December, Director General of NYSC for being was physically present.

The DG decorated some army officers before leaving the camp while the Director, Special Duties, Mr Hillary Nasamu, on behalf of the DG, made some presentation to corps members that participated in  the Quarter-Guards, the Cultural entertainment and the man o war presentations.


According to him, the corps members in Ekiti orientation camp were very unique because they were the first set of corps members the DG would taste two spoons of their meal, which shows that the first spoon was inviting.