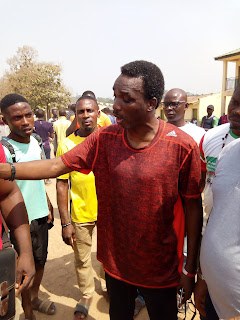 Our Correspondent was attracted to the football pitch, Sunday afternoon, by the long entourage of hummer jeeps with the inscription of the politician. 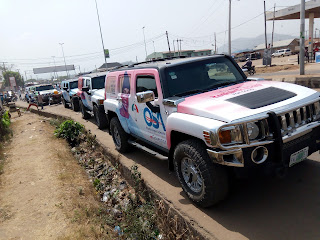 The match which was as at the time of writing this story was said to have been organized by the youths of Ajilosun in honour of the Lagos based politician.

He was said to have joined them in playing football since September 2017 and has been playing there consistently every Sunday till date.

The Ipoti Ekiti born politician who is in his early 50s was seen fully kitted dazzling around the football pitch and skillfully handling the ball. He granted Fountain Newsbreaker an exclusive interview during which he disclosed that he started playing for his school team at nine years.

Speaking further on the reason for engaging in sports, Aero  said, "through sports, youth can be developed and poverty can be eradicated." He made provision for the organizers to procure bibs and football materials.

He however disclosed that he had challenged the State government in making necessary sporting amenities for the school.  According to him, it was when Governor Ayodele Fayose heard that he wanted to replace the bamboo-made goal posts with an international standard posts that he quickly rushed there to do it for the public school.

"Now my next line of action is to grade the field in the school and turn it to a standard football pitch. So, if the governor's agents are here as I'm sure they are here, they should tell him and I'm sure he will rush here to do it. I'm going to wake our Governor from his slumber to provide necessary facilities in the world of sports", said the PDP  gubernatorial hopeful

In the course of this interview, some jobless youth popularly called area boys came to interrupt for want of money but the politician appealed to them for patience. Turning to our reporter, he said: "see these guys that are usually referred to as area boys, I'm going to develop them and make some of them international weight lifters by sending them out of the country for training.


"The reason why I'm here is that, I like to identify with the youths I have to look for where I could play football, so I stumbled on them here while passing bye and I played with them. So, it was in appreciation of this that they organized this match today for me  and I'm here with them. But being a footballer myself I chose to join one of the teams"