Encomia have kept coming in to extol the good virtues of a governorship aspirant under the platform of the All Progressive Congress (APC), Mr Bimbo Daramola who celebrated his golden jubilee recently just as he bagged an award at the All Star Concert & Humanitarian Awards presentation in Ado Ekiti.

The event was organized to showcase Ekiti Talents and Stars to the world and to bring more encouragement to developing youths. Daramola who is popularly called Congressman was recognized amongst some other industrious Indigenes of the State for being "a good Ambassador of Ekiti-State at home, in the diaspora and especially his contributions to human development during his period as  member of the Federal House of Representatives".

He was chosen for the award based on the fact that his life is basically for the betterment of Ekiti people and has a knack for developing youths around him.

The Veteran Yoruba Ace Actor, Pa. Peter Fatomilola on behalf of Ekiti All Star presented the award to the Congressman describing him as an astute leader that shows empathy and love for his followers.

Congressman Bimbo Daramola who is a Leading  Governorship aspirant under the All Progressives Congress was also given the honour to unveil the Ekiti Logo T-shirt. 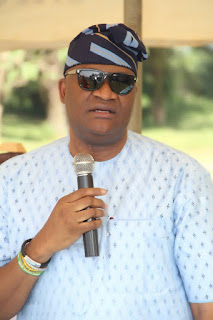 In his acceptance speech, he commended the organizers and promised them of his commitment in subsequent editions. He also urged all Ekiti sons and daughters, home and abroad to make sure they put in their best to choose a Leadership that would bring reprieve to our present dilemma. 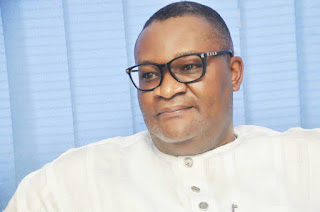 Among the downtrodden masses who spoke about Bimbo Daramola is Rasaq Akintunde Ogunlayi who said "I'm from Ikole Ekiti. Even though I have not really met Hon Bimbo Daramola before, l have read a whole lot of testimonies about him. He has touched  so many lives, including that of my sister who got a laptop from him during the computer training he organised in Ikole. All I'm praying is for his good deeds to speak for him during the forthcoming elections, being one of the very few loyal party men(of course I still remember his impacts during the struggle to reclaim the mandate of JKF). Go and conquer for the lord is your strength."

Akintunde said he had already identified with the Congressman, disclosing that he would be willing to work for him as a volunteer.

Meanwhile, the Ire Ekiti born politician has disclosed that he was not desperate to become the governor of Ekiti State but that his target is to lift the standard of living of the people. Accirdingvto him, "It does not really matter the new image of me that as being portrayed; I know and God knows that there is no personal need that is outstanding in my life  that l have to be a Governor to accomplish other than the opportunity to do minimum six times more of what i did with the mandate of the people.

Speaking further, the former federal lawmaker said: "humbly speaking, I did my best as member House of Representatives;  then with resources that were personal but now with our commonwealth"

He promised to stay true to his conscience and to God regardless of what was concocted against him. "One day, we all  will stand before Him to give account of our stewardship on earth"


Ekiti 2018: APC is weak, federal might not enough to beat Fayose – Bimbo Daramola.

A former House of Representatives member, Hon. Bimbo Daramola has warned leaders and members of the All Progressives Congress (APC) in Ekiti State against relying on federal might alone to win the 2018 governorship election.

Daramola, who is one of the governorship aspirants in the APC advised party leaders to put their house in order and work with a unity of purpose to regain the state number one seat from Governor Ayo Fayose and his People’s Democratic Party (PDP).

While stressing that the 2018 election is not a walkover for the APC, Daramola said the party must connect with the people now wait till the candidate emerges before selling its change agenda to the electorate.

Recently, Daramola who spoke with reporters in Ado-Ekiti, the state capital on the sidelines of a party to mark his 50th birthday anniversary, stirred the hornet's nest by asking former governors in the APC to drop their governorship ambition.

He said that he had the credentials to fly the party’s flag as the candidate in the July 14, 2018, governorship claiming that despite the perceived “disappointing performance” of Fayose, a good number of the electorate still has sympathy for the governor." He noted that it behaved on the APC and its leaders to highlight why Fayose and his anointed candidate, Prof. Kolapo Olusola, must not be allowed to retain power in 2018.

Daramola said: “With the way things are going, it seems APC is treating issues with levity. They are underrating Governor Ayodele Fayose, whom I know has the mastery but not the
mystery. But the fact that the APC looks weak makes him appears mysterious. “For us to win this election, we must stand up to him.

We must tell Ekiti how far Fayose’s tokenism called stomach infrastructure has gone to ruin them.

“We must connect with the electorate and do a deep retrospection of why Dr. Fayemi, a man who did so well lost in such a scandalous manner.

“We must let them know that the N5.7 billion flyover is a waste of public funds because it has no capacity to strengthen our economy. It will only serve as tourism for rural dwellers without benefit.

“That is why we must not trivialize this issue. We must not allow all comers affair. We must look for the best and forget the fantasy of federal might because no one can underrate the fact that Fayose is a streetwise and popular politician that must be tackled holistically.”

Speaking on the joining of the governorship race by former Governor, Chief Segun Oni and the alleged interest by the immediate past Governor, Dr. Kayode Fayemi, Daramola advised the duo to drop their ambitions which he said could destabilize the party.

He said further: “The day my leader, Dr. Fayemi declares interest will be a dark day for me. How can Dr. Kayode Fayemi and Engr. Segun Oni, who is supposed to provide leadership be contesting?

“Whoever thinks he will come here to write election results is just wasting his time. Ekiti has gone beyond that. It is baffling that our leaders were so weak to have allowed over 40 aspirants to show interest in the ticket regulation.”
News