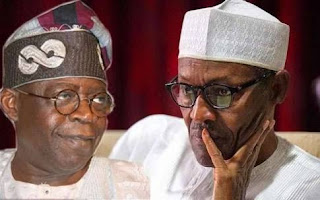 He told reporters after a meeting with Afenifere leader Chief Reuben Fasoranti in Akure, the Ondo State capital, that the President is a believer in “rule of law and due process”.

On Buhari’s return bid in 2019, Tinubu said:   ”I have not heard about that and the APC spokesman has not said that.

“No governor can appropriate the power of endorsement to himself.

“President Buhari is a believer in process. The Buhari I know believes in rule of law and due process.

“We wanted him even before the last convention and primaries of the party and Akeredolu is here standing with me, he was not a governor then.

“He was one of the leading delegates that voted properly and Buhari was a clear winner.

“We follow all the constitutional provisions and an individual opinion does not matter at this stage.

“Buhari will want a normal process, Buhari that I know. Who says he will lose at any convention?

“What you are hearing is just a campaign. Buhari has not excluded anybody, and he has not stopped anybody from aspiring or contesting.”

Tinubu arrived at the Akure Airport at about noon and was received by Ondo State Governor Oluwarotimi Akeredolu, his deputy Agboola Ajayi, State Executive Council (SEC)members and party leaders.

With Tinubu at the meeting held at Chief Fasoranti’s residence was Chief Bisi Akande.

A crack in the ranks of Yorba leadership which broke out 14 years ago with the split of Afenifere might be patched to bring the Afenifere Renewal Group (ARG) and Afenifere  together .

The ARG is led by Hon. Wale Oshun. The nonagenarian Pa Fashoranti is the leader of the Afenifere. The groups support different political tendencies.

After the meeting, Pa Fasoranti said: “It is an indication of great things to come. With the coming together of Yoruba leaders, there will be an understanding on major issues affecting the Yoruba race.

“We will consult and move ahead. As it is now, there will be a great understanding among the leaders as Tinubu is a leader in his own right.

“I think it (the visit) should lead to reconciliation, ARG and the mainstream, as Tinubu has a leg there. They are his supporters.  This signal shows we will come together.”

Speaking on his mission to Akure, Tinubu said: “I am in Akure to acknowledge the leadership of Pa Fasoranti in our own race. He is a great leader of the Omoluwabi and in his twilight we want him to be happy.

“He has been a great leader to all of us. His intellect is still very intact. We are here to seek his advice, seek his understanding and prayers. That is why I am here.”
News