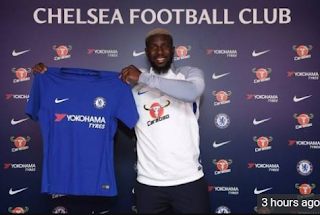 Tiemoue Bakayoko has completed his £40 million move to Chelsea from Monaco after completing his medical on Friday and signing a five-year deal.


Chelsea and Antonio Conte targeted Bakayoko as their first choice option to strengthen their midfield and they are now expected to allow Nemanja Matic to leave to make room for the France international.

Talks between Chelsea, Monaco and Bakayoko's representatives have moved slowly since they first started but all parties ultimatley came to an agreement for the 22-year-old.

Bakayoko returned from his holiday in New York to complete the final arrangements of the transfer, though a knee injury could rule him out of the Blues's pre-season friendlies.

Chelsea will next look to complete a deal for Juventus' Alex Sandro, which could break their transfer record that currently stands at £50m for Fernando Torres, as well as looking for attacking options.