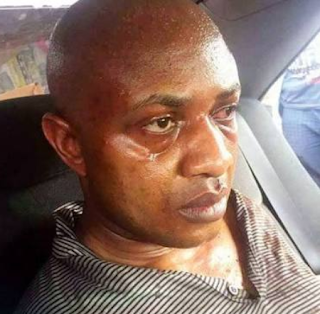 Evan's Lawyer, Ogungbeje says Evans is being kept unnecessarily because the police does not have evidence to charge him

An unnamed family member says there are worries among Evans' people that he may have been allegedly killed by the police.

He says there were reports that Evans was imprisoned in an underground cell Olukoya Ogungbeje, lawyer to notorious kidnapper Evans, has revealed that the Nigeria Police Force is yet to charge the suspect to court because it had no evidence against him. Ogungbeje told The Sun that the police is holding his client unnecessarily since his arrest on June 10 and trying to brainwash him.

He said: “We are not saying that we want to ensure that our client escapes justice at all costs. What we are saying is that we were given letter of representation and properly briefed and we have the claim to represent him within the confines of the law.

“As we speak, there is no single evidence of the matter, do you know that there is no single witness in that matter, do you know that no single case file has been opened on that matter? He has been moved to Abuja. “Someone that we did not have access to while in Lagos Police Command, how do you think that we will be able to access him in Abuja? The police keep on brainwashing him, they keep on threatening him, they keep on deceiving him. Take him to court, that is what the law says. The police are only playing the ostrich.

“Do you know as his lawyer, I have been denied access to him, do you know that the father, his mother, his wife and children have been denied access to him? The police are not telling the truth. Why have they not published the court order they claimed to have got? Let them name the judge. “They are only misinforming the public. They are not bold enough to publish the order. In short, they don not have it. The police have been mischievous. There is more to it than meet the eye. The matter is in court and we should allow the court to handle the case and wait for the outcome of the matter.” Ogungbeje said he was not the only one barred from seeing Evan as even his wife, children and parents have been refused access to him since he was arrested.

A south-east based member of Evan’s family, who spoke on condition of anonymity, said: “We are scared something terrible may have happened to him because of the way police has handled this matter so far especially the way his movement from Lagos was shrouded in secrecy. How would we have known if not your paper (Saturday Sun) which exposed the move in your report last weekend? “From our own investigation, we learnt he was first dumped in an underground cell at the force headquarters in Abuja. Though we have also heard that he has been moved to a secret location believed to be the FCID cell in Garki area of Abuja, we are yet to confirm that or his exact location and wellbeing as we speak?”