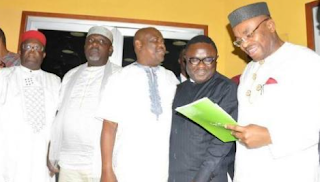 The governors met in Enugu on Sunday July 9, 2017.
They resolved to pursue inter-regional cooperation for the economic benefit of the two regions as they also reviewed the current state of Nigeria among many others issues


All the South-East and South-South governors have resolved to pursue inter-regional cooperation for the economic benefit of the two regions.

The governors also reviewed the current state of the nation.

Governor of Akwa Ibom state, Emmanuel Udom, the chairman of the meeting while reading a communique after their meeting on Monday, July 10, said the the governors in the region have agreed to work together to realign as a people with common cultural heritage and affinities.

Also, the host of the meeting Ifeanyi Ugwuanyi, the Enugu state governor had described the meeting as the first in the present dispensation.

Ugwuanyi said the meeting will result to a mutual cooperation between the people of the South-East and South-South.

Meanwhile the Ebonyi state governor David Umahi in a statement signed by his chief press secretary Emmanuel Uzor said the meeting was aimed at brainstorming on salient issues affecting the two regions.

“We are meeting as brothers to talk about regional integration and find lasting solution to intermittent outbreak of interstate clashes arising from boundary disputes among the two regions.

“We are also talking about economic survival of the two regions and look at possible ways of bringing our ingenuity and making use of our huge deposit of both human and natural resources to attain economic viable zones in Nigeria," Uzor said.


“There is also need to discuss security, peace and unity of the two regions and find lasting solution to various salient issues that affect our unity in Nigeria.

“It is a meeting born out of love and desire to find cohesion among the two regions and I am happy that my brother governors responded to the call even at the short notice given to them. In other words, we are discussing regional and national interest.‎”

After this first meeting, the governors also agreed that their next meeting will be held in port Harcourt, Rivers state on August 27.

However, governors Ifeanyi Okowa and Godwin Obaseki of Delta and Edo states were not present at the meeting.
News