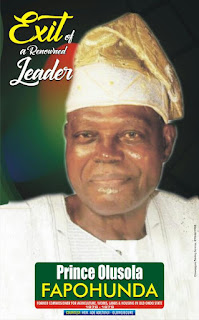 Today we gather here not to mourn but to celebrate a life well spent in our father and grandfather, Prince Olusola Fapohunda who has gone to be with the saints. Prince Sola Fapohunda as was fondly called lived a fulfilled life.  He was a successful businessman both in the field of quantity surveying (his primary discipline) and Civil Engineering. Through these great exploits, he made impact throughout the length and breadth of Nigeria.

He was a pioneer Commissioner in the then newly created Ondo State in 1976. He was Commissioner for Agriculture for a brief period before being reassigned to be the Commissioner for Works and Housing. He was unequivocally part of the success story of the early years of Ondo State.
More importantly, we are here to celebrate him among others, for the great love he had for his root and his selfless services to our dear Okemesi Community. He contributed immensely to the development of Okemesi, economically, educationally and socially. The following highlights of his legacies will suffice to imprint his foot marks on the sand of time:
(1). Federation of Okemesi Improvement Unions. (FOIU)
It gives me great pleasure to remark that Prince Sola Fapohunda is the father of modern FOIU. He was president of FOIU for many years. He brought the body into much relevance in the community and deployed his resources to run it to the benefit of all.

(2). Educational Development
Prince Sola Fapohunda was the founding father of the Community High School Okemesi. The master plan of the school was his brain child. The school was originally planned to be a Comprehensive High School with boarding facilities. Thank God today the school has produced many outstanding successful people who are masters in their respective fields of endeavour.

(3). Okemesi Students Scholarship Scheme
Through this scheme, he awarded scholarship to many students of Higher Institutions who were Okemesi indigenes.

(5). Christian/Muslim Crisis
His timely intervention and doggedness in handling the Christian/Muslim crisis averted a breakdown of law and order in our Community during his tenure as President of FOIU. He made huge contributions both in cash and kind to the success of building the new mosque to pacify the Muslim community.

(6). Chieftaincy Dispute
He played reconciliatory roles in the chieftaincy crisis rocking the community.
(7). Boundary Adjustment Committee
In conjunction with Chief Adeoti and others, he played prominent roles in the boundary adjustment between Okemesi and her immediate neighboring towns.
(8). A motivational Speaker
He often found time to give talks to the Okemesi Students Union. I was opportuned to be in attendance in one of those instances and I still remember the day till now because of the motivation I derived from his talk.

Ladies and gentlemen, we must accept the hard fact that our dear father Prince Olusola Fapohunda is no more physically with us but we are consoled that his soul will continue to rest in the bosom of our lord Jesus Christ, his legacies will continue to endure and the great family he left behind will surely continue to keep the banner flying.
Barrister Wale Fapohunda, an icon of the family was one time commissioner for Justice and Attorney General of Ekiti State, like father like son, you would say!
Please join me and the entire Okemesi Community to celebrate a worthy leader, a pearl, a beacon and a great hero of our land Prince Olusola Fapohunda.