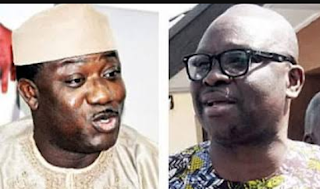 For some time now, there have been allegation and counter allegations as to why Governor Ayodele Fayose has been unable to pay workers’ salary as a result of huge debt allegedly left behind by the former administration of Dr KayodeFayemi.

With the following facts and figures which workers can confirm from the
office of the Accountant General, Ministry of Finance and SSG's office, it is easy to know who is really deceiving the Ekiti workers. During the administration of Dr. Kayode Fayemi, he paid N2.6b for workers salary monthly. Now, Governor Fayose also pays N2.6b as monthly wage bill".
Fayemi during his government hired 708 board members but Governor Fayose in a bid to reduce heavy wage bill reduced them to 50. Fayemi had 429 SAs/SSAs, while Fayose reduced them to 11. Fayemi appointed 735 Ekiti people into the 16 LGS and LCDAs, but Fayose reduced them to 80.

At the Cabinet level, Fayemi as a governor had 43 Exco members, but Fayose reduced them to 21.Fayemi engaged 800 peace corps members witheach earning N20,000.00 per month while Fayose has sacked them all.
In his bid to generate employment for the jobless youth roaming the street, Fayemi hired 535 Ekiti people into EKSTMA each taking N25,000.00 per month, but Fayose reduced them to 35 and deployed staffs from local govt to compliment them.

In Paramedics, Fayemi engaged 160 Ekiti people but Fayose has none. Fayemi paid Senior Citizens (Owo Arugbo) totaling 20,000, each taking N5,000.00 monthly
But Fayose cancelled the scheme.
Youth Volunteers Scheme - Fayemi hired 10,000youths each taking N10,000.00 monthly while Fayose has none. This is besides Fayose’s disclosure that hediscovered 500 ghost workers during staff auditing, and saves several millions in the process.

With the above fact, coupled with N1.3b monthly budget support fund from the federal government, and the constitutional monthly allocations some workers who spoke with the Fountain Newsbreaker under coverwonder why Fayose still claims that there is no money to pay salary.
News