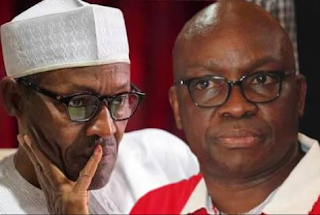 As Nigerians celebrate two years of President Muhammadu Buhari's administration on Democracy Day the All Progressives Congress (APC) in Ekiti State has scored the President high in the programmes and policies implementation urging Ekiti State Governor, Mr. Ayodele Fayose to emulate him.
In a statement by the Publicity Secretary, Taiwo Olatunbsun, in Ado-Ekiti, the party commended Buhari on the successes recorded in the security of lives and property of Nigerians across the country, citing in particular relative peace in the Niger Delta and defeat of Boko Haram in the North-East.
Olatunbosun urged Governor Ayodele Fayose to emulate Buhari's leadership qualities by being focused on issue-based governance instead of getting himself involved in "frivolities of streets politics that add nothing to the quality of life of Ekiti people".
Apparently reacting to the commendation given to the APC led federal government second anniversary in office, Governor Fayose maintained as usual that, “I have made enough noise about the recklessness of the federal government on monetary issues, if you check today's papers, you would have read that Nigeria’s borrowing has risen to N19trillion from about N12trillion. I am in court against the federal government, when they borrow money, they borrow in our name but they don't give states from it, when they want to repay, they pay from the money belonging to all of us. This is wrong.  People are not talking because some are in APC and those in PDP are afraid.  I am the Daniel here, I will tell them the truth.
The APC spokesperson also praised the President for the adequate funding and restoration of confidence in the military to record the successes in the two theatres of war in the country.He said this made the gallant performance by the military possible, even as he noted that the empowerment schemes through increased funding of amnesty programmes and cleansing of the Ogoniland were worthy initiatives that ensured the successes recorded in the stabilisation process for peace to reign in the volatile regions.
"In spite of the recession and crippling corruption by the past administration, President Buhari has successfully applied the nation's funds, such as bailout and Budget Support Facility cash, to address the pressing needs of Nigerian workers, including providing social security safe net for vulnerable Nigerians through N-Power MDG empowerment schemes.” Olatubosun maintained
Chief Olatubosun opined that the faithful implementation of Bank Verification Number (BVN) and Treasury Single Account (TSA) policies had elicited confidence in Nigeria's financial system, resulting in international and local supports to lift Nigeria out of recession.
He added that under President Buhari, democracy had thrived through strict adherence to the separation of powers, as the Executive, Legislature and Judiciary function more smoothly and openly, leading to greater efficiency in running of the institutions of government, which has in return led to more confidence in Nigeria systems in international community.
He therefore concluded that President Buhari had fulfilled his promises to the Nigerian people and “we believe that the current budget that addresses issues and programmes that will touch the lives of Nigerians will be faithfully implemented to address the promises that APC-led administration made to Nigerians." He said.
"Like Buhari, Fayose should make himself the apostle of peace instead of making himself head of thugs squad that destroys private and corporate properties and wealth in the state over disagreement on issues.
Fayose who made his assessement of Buhari’s administration during his phone-in programme further said “The Federal Government should stop inciting people against their governors, we got N8.8b in the first tranche of the Paris Club refund, the N8.8b  was shared between the LG and the state government, the second tranche that is coming,  they said they will give us 50% of what we got the first time, it will hardly pay a month's salary.
News